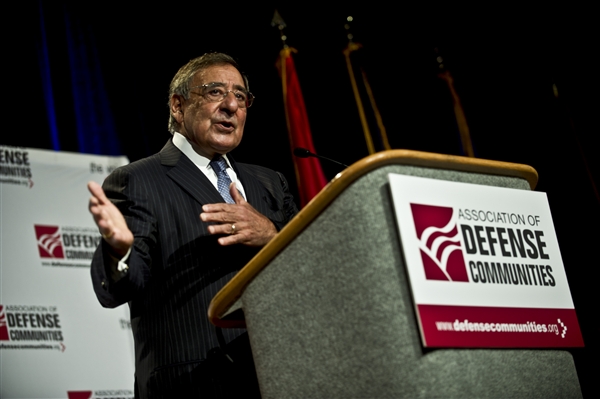 Sequestration would be “a disaster” not only for national defense, but for defense communities, Secretary of Defense Leon Panetta said Monday.

Speaking at the Association for Defense Communities conference, Panetta said the prospect of adding $500 billion in sequestration cuts to the $487 billion in planned spending reductions over the next decade would have devastating effects.

“I’ve made clear, and I’ll continue to do so, that if sequestration is allowed to go into effect, it’ll be a disaster for national defense and it would be a disaster, frankly, for defense communities as well,” he said. “And frankly, it’s not only true about the DOD budget, it’s also true relating to the domestic discretionary cuts that will deprive communities of the needed federal support they need in areas like education.”

The secretary said the new defense strategy and the Pentagon’s budget decisions reflect the need to bring the government’s budget under control.

“There is a strategic and fiscal imperative that is driving the department to a smaller, … leaner and more agile force – that’s the reality,” Panetta said. “It would be irresponsible not to reduce the budget and do our role in confronting the fiscal challenges facing this country.”

The secretary noted that though the department and the nation are weathering a period of great challenge, an opportunity for planning emerges.

Under the new strategy, Panetta said, the force will remain agile, quickly deployable, flexible and prepared to deal with crises anywhere in the world. Additionally, he said, vigilance against cyberspace threats is essential. He called the cyber arena the “battlefield for the future,” with the potential to cripple progress for the United States and its allies.

The strategy also must include investment in and protection of DOD’s industrial base, the secretary said.