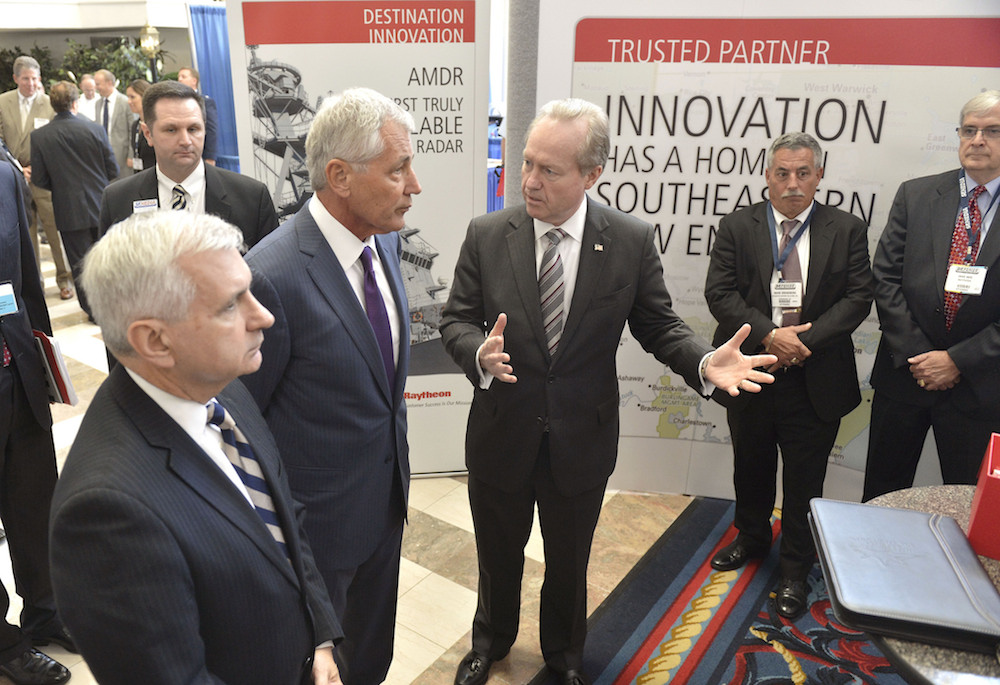 The Defense Department is launching a new long-range research and development effort designed to ensure the nation’s military can maintain its technological edge over a growing list of potential adversaries, from the traditional high-tech armies of Russia and China to a myriad of terrorist groups proliferating throughout the Middle East and Southeast Asia.

Speaking Wednesday at the Defense Innovation Days conference, hosted by the Southeastern New England Defense Industry Alliance in Newport, Rhode Island, Secretary of Defense Chuck Hagel said he has ordered the development of a “third, game-changing offset strategy” that will set the course for a wide range of new technologies and streamline the way the Pentagon develops, tests and acquires new capabilities.

“Given the current budget environment, innovation will be critical. We must be innovative not only in developing the technologies we buy, but also how we buy them, and how we use them in order to achieve our operational and strategic objectives,” Hagel said. Among the future capabilities the department has set its sights on are robotics, advanced computing, miniaturization and 3-D printing. And in every case, it is the private sector at the forefront of innovation, acknowledged Hagel. “DOD must be able to assess which commercial innovations have military potential, rapidly adopt them, adapt them and then test and refine them, including through war-gaming and demonstrations,” he said.

But the Pentagon may be facing an unprecedented perfect storm of challenges to its ability to leverage the most current innovations and to modernize, including a high operational tempo stemming from ongoing and emerging crises, an acquisition system nearly paralyzed by regulations and paper-based processes and mandatory spending cuts that will go into effect again in 2016 unless a divided Congress stops them.

Gordon Sullivan, president of the Association of the United States Army, released a statement Thursday urging Congress to “kill sequestration” and ensure funding for conventional forces as well as cyber and special operations forces. “Those who know us best can see that we have lost our edge. Our forces are less ready, and we are taking apart a magnificent, combat-honed force based on a great American myth that when we need defense we can just create it,” Sullivan said. “Let me be clear, it is a myth. A lesson we should have learned by now is that the cost of being unprepared is paid in lives and spilled blood.”

The implications of falling too far behind the technological curve are not lost on Hagel. In addition to the new offset strategy, the Pentagon is poised to unveil the latest version of its acquisition streamlining and reform effort, known as Better Buying Power 3.0. The program will make renewed efforts to reduce the amount of time it takes for the department to identify, test and deploy new systems, including relying more on modular components and open systems architectures, making use of prototypes, providing industry draft requirements earlier in the contract cycle, removing regulatory obstacles to timely acquisitions and increasing the department’s interactions with global defense firms.

Although the call for acquisition reform is a familiar refrain throughout the halls of the Pentagon and Capitol Hill, Hagel’s effort comes at a time of unprecedented uncertainty. As U.S. forces recover from 13 years of warfare in Afghanistan and Iraq, the Pentagon is under pressure to remain ready for contingencies spanning the globe, from Ukraine to Iraq, Syria to Iran, North Korea to sub-Saharan Africa, and even cyberspace.

“I am greatly concerned that our military’s technological superiority is being challenged in ways we’ve never experience before,” Hagel said. “China and Russia have been trying to close the technology gap by pursuing and funding long-term, comprehensive military modernization programs.  They are also developing anti-ship, anti-air, counter-space, cyber, electronic warfare, and special operations capabilities that appear designed to counter traditional U.S. military advantages,” he said.

Frank Kendall, the undersecretary of Defense for acquisition, technology and logistics tapped by Hagel to spearhead the Better Buying Power initiative, echoed Hagel’s comments almost verbatim during an industry conference the same day in Washington, D.C.

“It’s quite clear [Russia and China] are building things that are designed to be effective against our objectives in the United States and anywhere else,” Kendall said. “And they’re doing a reasonably good job of it, particularly China. [U.S.] technological superiority is not assured.”

Retired Navy Rear Adm. Jamie Barnett, co-chair of the telecommunications group at Venable LLP in Washington, D.C., and a former director of Naval Education and Training at the Pentagon, said the issue of “re-tooling with challenges in your face” has always been a problem for the military. More importantly, the so-called peace dividend that some may have expected after the wars in Iraq and Afghanistan that would have allowed for much-needed recovery, repair and modernization efforts no longer seems likely, he said.

“The fact of the matter is [significant modernization] is probably not possible,” Barnett said, given the threats posed by Russia’s actions in Ukraine and the rising threat of the Islamic State in Iraq and Syria. “The world situation has changed radically. The post-war period we were expecting has not really materialized.”