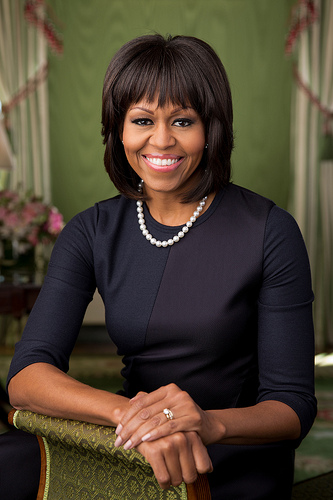 What do most  parents do when they can’t make (or want an excuse to skip!) a social event?

They blame it on their children.

In the April issue of Vogue, the Obamas give two reasons why, unlike the Reagans and the Clintons, they rarely entertain private guests in the White House: Sasha and Malia. The self-described Mom-in-Chief seems unconcerned that the Washington press has the idea that she and the president are a bit anti-social.

“I don’t think it’s our job to put an idea to rest,” Michelle Obama tells Vogue, “Our job is, first and foremost, to make sure our family is whole. You know, we have small kids; they’re growing every day. But I think we were both pretty straightforward when we said, ‘Our number-one priority is making sure that our family is whole.’ ”

Vogue has re-elected the First Lady for a second term as its cover girl. The magazine revealed the cover today. She first graced Vogue‘s front page back in March 2009.

Despite her status as a fashion icon, Michelle Obama talked very little about clothing designers or entertaining celebrities and world leaders. In the article, which also features the president, the Obamas dish on their parenting style, which includes lots of texting and smart phone photo sharing, and the “family policy” that influences the president’s 6:30 p.m. dinner time as well as the decisions he makes in the Oval Office.

“That’s the lens through which we’ve always viewed our public service,” explains President Obama, “broadening this fierce sense that we have of: I’ve got your back. Beyond just the immediate family to the larger American family, and making sure everybody’s included and making sure that everybody’s got a seat at the table.”

The April issue of Vogue, featuring photos of the First Couple shot by Annie Leibovitz, will hit newsstands March 26.