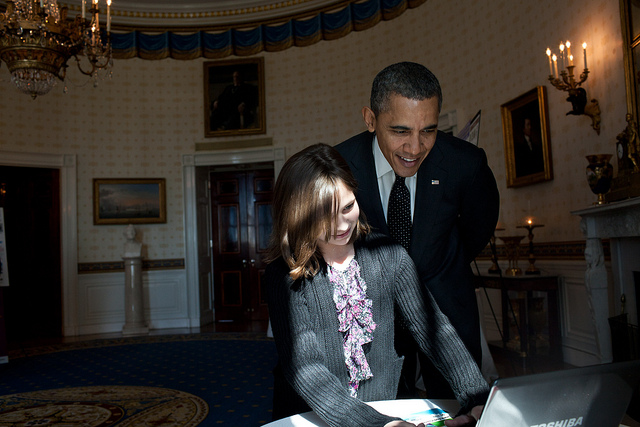 Tech entrepreneurs are used to pitching venture capitalists, but selling kids on writing code is something new for the likes of Mark Zuckerberg and Jack Dorsey.

A new organization, Code.org, wants to be the command line between kids and code, and hopes to inspire future generations to consider computer science as an option, much like they do being an astronaut, doctor, fireman or movie or sports star.

Code.org’s goal, to spread the word “that there is a worldwide shortage of computer programmers, and that it’s much easier to learn to program than you think,” is backed by a celebrity list of entertainers and entrepreneurs, including Facebook founder Zuckerberg, Twitter founder Dorsey, Bill Gates, professional basketball player Chris Bosh and musician will.i.am. In a promotional video accompanying the organization’s launch, each reminisce about their first computer experiences and the need to learn programming.

“It’s important for these kids. It should be mandatory, to be a citizen on this planet, to read and write code,” says will.i.am.

Code.org is the brainchild of technology entrepreneur Hadi Partovi, who cites two key occasions that inspired the initiative.

The day Steve Jobs passed was a collective sense of loss and profound moment for many around the world. For Partovi, it sparked a realization and call to action.

It made him ask, “what am I doing with my life that is useful and good in the world? Here’s the guy that I was hoping would be the the number one person as a spokesperson for getting kids to learn computer programming, and I’m sitting on my butt doing nothing.”

The second moment came at a technologists roundtable with President Barack Obama discussing how technology can help the government and vice versa.

“It struck me that the best way the tech industry can help the U.S. economy and the U.S. government solve these problems is by what I’m doing right now,” Partovi said.

“We’re in this world where the government is arguing about ‘do we want to raise taxes or do we want to cut spending and how we make ends meet?’. If we can just simply convince more students to study this field, that will both fill jobs that will bring us up to $500 billion of value to the U.S. economy, and it will improve upward mobility in a time of record inequality,” he said. “This is the only thing I know that basically hits both of those birds with one stone, and all it takes is convincing and inspiring students to learn something.”

Support for the initiative stretches from Silicon Valley to the White House Office of Science and Technology, including former health IT entrepreneur and current U.S. Chief Technology Officer Todd Park.

“Technology and computers are very much at the core of our economy going forward,” says Park on the Code.org website. “To be prepared for the demands of the 21st century—and to take advantage of its opportunities — it is essential that more of our students today learn basic computer programming skills, no matter what field of work they want to pursue.”

OSTP recently shared its enthusiasm in a “Why kids should learn to #CODE!” tweet linking to Code.org’s video.

In true engineer fashion, the organization’s mission is motivated by the numbers, ones that show sharp declines in educational access and support for computer science studies.

According to Code.org, over the next 10 years, there will be 1.5 million computer science job openings and just 400,000 graduates of qualified candidates. Programming jobs are growing at twice the national average, yet 9 out of 10 schools don’t offer programming courses. Currently, in 41 of 50 states, coding classes don’t apply towards high school graduation math or science requirements.

The most important work in Code.org’s efforts will be done at the local level, with educators and school boards, where many crucial education decisions are made, including getting programming credit requirements on par with science and mathematics.

To foster this, the Code.org website has created “tracks” for students, where they can learn more about programming, and teachers, where they can better understand how to inspire students or express an interest in getting computer courses introduced into their curricula.

The immediate level of interest from both educators and engineers has been overwhelming, said Partovi.

“There’s about 4,000 schools in the country that teach computer programming. We have 3,000 more schools who want it, and that’s after just 36 hours,” Partovi said. “If we just completely stopped and did nothing but help get those schools, we can double the access level to the country.”

Partovi said 10,000 engineers have expressed an interest in volunteering their support.

“That’s more than double all of the computer science teachers today … Linking up those volunteers with those schools is a natural way to solve those problems.”

Partovi is no stranger to the impact of technology on education and entrepreneurial success. His father helped start Iran’s first technical college, and he is a successful entrepreneur in his own right, having played founding roles in startups such as Tellme and iLike. He has also served as an early investor or advisor to Facebook, DropBox and airbnb.

Despite the quick time-to-market focus technology ventures tend to take, Partovi has a long-term vision for Code.org’s impact.

“My 10-year goal would be that you can’t graduate from high school in this country without having been exposed to the basics of computer programming,” he said. “The reason the exposure is important, is that it’s just not as hard as people think.”

Code.org’s promotional video symbolically opens with a quote from Jobs himself:

“Everybody in this country should learn how to program a computer … Because it teaches you how to think.”

Like Jobs, Partovi has grand aspirations for how coding can change the world.

If he has his way, his newest venture will be the “one more thing” that inspires today’s youth and America’s educational system to reboot how code can get kids to think different.