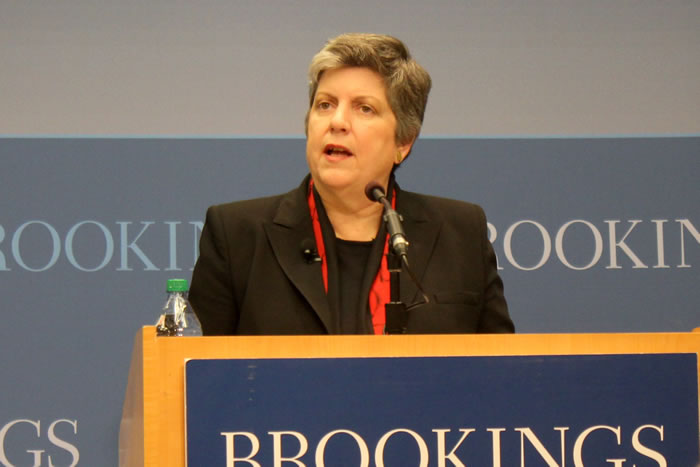 The federal government has worked with the private sector to secure the physical security of the nation’s critical infrastructure for decades, so there is no reason it cannot do the same in the cyber realm, Department of Homeland Security Secretary Janet Napolitano said.

Speaking Tuesday at the Brookings Institution in Washington, D.C. on the state of DHS, Napolitano highlighted the cybersecurity executive order signed by President Obama earlier this month during her hour-long talk, saying information sharing with the private sector is critical to success.

“We’ve worked for decades on physical security, protecting the airports and seaports, national broadcasting centers and nuclear power plants – among other areas,” she said. “There’s no reason we can’t work together to protect the cyber systems of our critical infrastructure that so much of our economic well-being, national security and daily lives depend on.”

Napolitano said the department needs the public and private sector to continue to share information while protecting privacy and promoting best practices in defending the nation against cyber threats.

In highlighting the growth of the department, Napolitano pointed to cybersecurity as an example of how it’s evolved since its creation in 2002. She said cyber wasn’t a major priority of the department at first, but is now one of the five core mission areas.

She said over the past four years, the department has built systems to detect intrusions, expanded its 24-hour threat watch center and there are plans to aggressively recruit the cyber workforce of the future.

“We will be investing greatly in cybersecurity,” Napolitano said in pointing out the department’s future priorities. “It will be at the top of the list.”