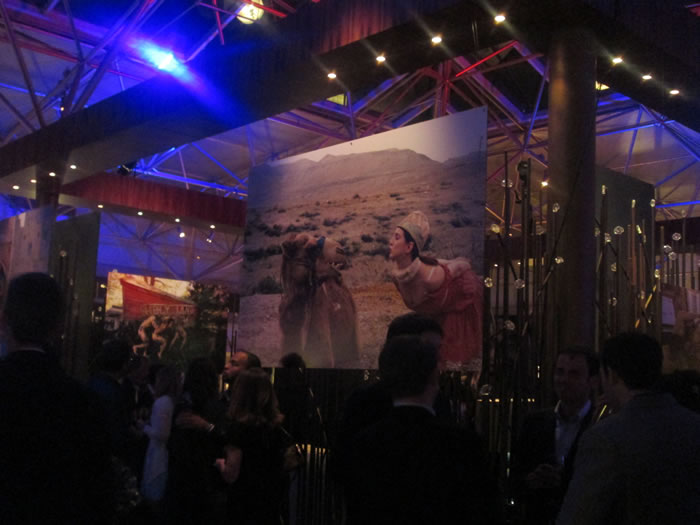 Photographs from artist Robert Whitman are showcased inside the downtown lobby of the Renaissance Hotel (Photo: Patra Wroten)

When the newest work from New York photographer Robert Whitman was showcased last week in Washington, it wasn’t at the National Portrait Gallery or any other museum. It was in a hotel lobby.

Busy business travelers rarely have time to be enlightened by Washington’s art and music scene. Locals often avoid mainstream attractions, begrudging the lines of tourists. Renaissance hotel recognizes that in fast-paced cities like D.C. both visitors and locals benefit when culture is consolidated. That’s why on any given day inside the Renaissance lobby the space might transitions from exhibit hall to concert stage.

“We want to create interesting experiences in our hotels that are unique to the area, that provide guests and local patrons the opportunity to discover something new about the city or destination,” says Diana Pavlov, who leads the hotel’s brand marketing and entertainment division. “We focus on things like music, culinary, fine arts and photography.”

Whitman’s work, brought to Washington and the Renaissance with the partnership of Esquire magazine, debuted on the night of the State of the Union, which was also Mardi Gras. Still, a lively, interested crowd of locals mingled with hotel guests enjoying complimentary Whitman’tinis and mini-lamb burgers. With a camera around his neck, Whitman roamed the crowd, too.

“A few months back, Robert and I traveled to Washington, D.C., to the hotel and to check out possible locations for the photo exhibit,” said Scott Lehmann, an executive director at Esquire. “Robert was really drawn to the lobby of the hotel and loved the energy that it gave off.”

Whitman joins Grammy-winning performers like Bruno Mars and Hollywood DJ Samantha Ronson as artists who have been showcased in a Renaissance lobby, all part of a hotel service called RLife LIVE. Though Whitman’s work is no longer on display in the Washington Renaissance, the hotel anticipates other exciting RLife LIVE features throughout the year for both visitors and Washingtonians to enjoy.