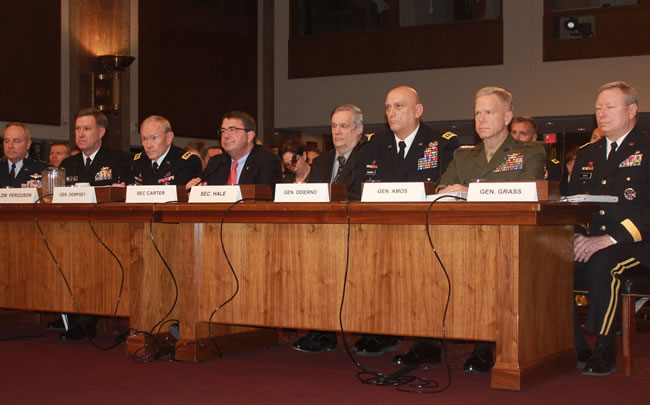 In a historic hearing before the U.S. Senate Committee on Armed Services, a group of the nation’s military elite called for an end to sequestration and a regular 2014 Budget Appropriation to avoid a catastrophic cut to the military that would cause a severe risk to national security and endanger the lives of military service members.

The leaders urged Congress to provide the department with a stable fiscal situation – free of sequestration and a continuing resolution – to allow them to adequately plan for the future of the department and provide the nation’s military with the training, resources and support it needs to keep the nation secure.

“The cloud of uncertainty hanging over the department is already having lasting and irreversible effects,” DOD Deputy Secretary Ash Carter said. “It needs to be dispelled and not moved to the horizon. The magnificent men and women of this department, and their families, deserve no less.”

Sequestration was originally planned to take effect on January 2, but was pushed back to March 1 as part of the fiscal cliff negotiations to give Congress more time to come up with a viable solution.

If enacted, sequestration will cut approximately $1 trillion from the federal budget over the next decade, half coming from the federal civilian agencies and half from defense and national security.

The measure, put into law during the budget debates of 2011, was never intended to actually take effect. It was put in place to be an overly harsh measure that would force Congress and the White House to come to a timely debt solution.

As the new deadline has crept closer, though, there has been growing concern that sequestration will take effect.

In the past two weeks, President Obama called on Congress to make smaller cuts to the deficit – at least $85 billion – that would delay sequestration again, this time until Jan. 1, 2014.

“The country should not suffer because people in Washington can’t come to an agreement,” Obama said at the time.

It is believed that sequestration would cause another recession as the cuts to government programs would cause the layoff of more than two million employees nationwide in nearly every sector of the economy.

Last week, the White House released a fact sheet to the media explaining the effects sequestration would have on the nation’s middle class and a number of federal civilian programs in addition to the well-documented impact it would have on national security.

Obama also used his weekly YouTube address this past weekend to further discuss the effects of sequestration on the middle class.

In Tuesday’s hearing, Dempsey pointed out that the Defense Department is already absorbing $487 billion in spending cuts as part of the Budget Control Act of 2011. Those cuts, combined with continuing resolutions – the department has operated under a CR for 14 of the past 18 months – and sequestration has caused an uncertain fiscal environment.

“Potential reductions of this magnitude require us to carefully and deliberately evaluate trade-offs in force structure, modernization, readiness, and compensation – we can only do this with budget certainty, flexibility and time,” Dempsey said.

Odierno called the fiscal outlook of the U.S. Army “dire and unprecedented” and that while he understands the fiscal pressures facing the country, funding cuts to the military need to be done in a thought out and careful way that will not harm the Army’s readiness and ability to defend the nation.

“The magnitude of today’s fiscal uncertainty will have grave consequences for our soldiers, our civilians, and our families who have sacrificed so much over the past decade,” Odierno said.

Amos said the Marine Corps faces a $406 million reduction in its operation and maintenance budget relative to the president’s fiscal year 2013 budget. Those cuts will create immediate challenges in maintenance, training and base operations.

“Given the looming specter of the sequestration in addition to the CR, we face an extended period of severely constrained spending driven by rules that provide little flexibility to efficiency apply the mandated reductions,” Amos said.

Welsch said the sequestration equates to a potential $12.4 billion cut to the topline budget of the U.S. Air Force that will be coupled with a $1.8 billion shortfall in overseas contingency operations funding resulting from a potential year-long resolution. He added that major commands within the Air Force have called for a topline budget reduction of 10 percent for fiscal year 2013 or approximately 22 percent of their remaining funds.

“I urge Congress to do all that is necessary to avert the arbitrary cuts of sequestration,” Welsch said. “We owe it to America’s sons and daughters, who put their lives on the line whenever and wherever their National asks, to care for their families, provide them with sufficient training and equipment them to a position of advantage over all potential adversaries.”

by Billy Mitchell • 2 hours ago
Acquisition