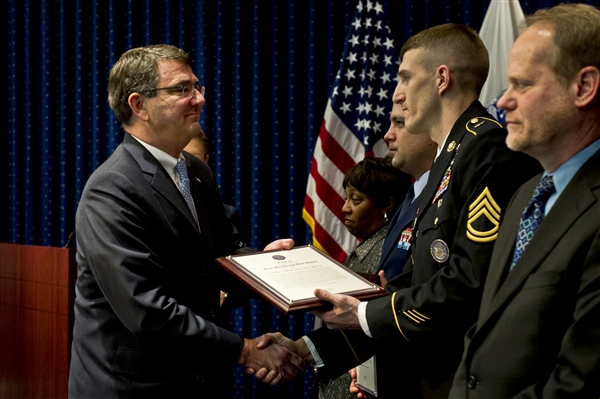 The Defense Threat Reduction Agency was honored on Thursday with the Joint Meritorious Unit Award during a ceremony at Fort Belvoir, Va.

Deputy Secretary of Defense Ash Carter presented the award, which is the only ribbon award granted by the Defense Department and is the organizational equivalent of the Defense Superior Service Medal.

“In all your work you have aggressively pursued the president’s vision for countering [weapons of mass destruction] around the world,” Carter said. “You’ve kept WMD out of the hands of terrorists by locking down dangerous nuclear and biological materials, destroying legacy weapons and developing technologies to prevent, defend against and counter a WMD attack.”

According to the agency, DTRA performs critical functions, among them helping the chairman of the Joint Chiefs of Staff, the Air Force and the Navy conduct nuclear safety and security inspections; providing people, procedures and tools to perform U.S. nuclear weapons stockpile accounting and tracking.

The agency also serves as the DOD executive agent for sustaining emphasis on nuclear weapons training expertise, and response protocols, procedures and practices for potential nuclear weapons accidents and incidents.