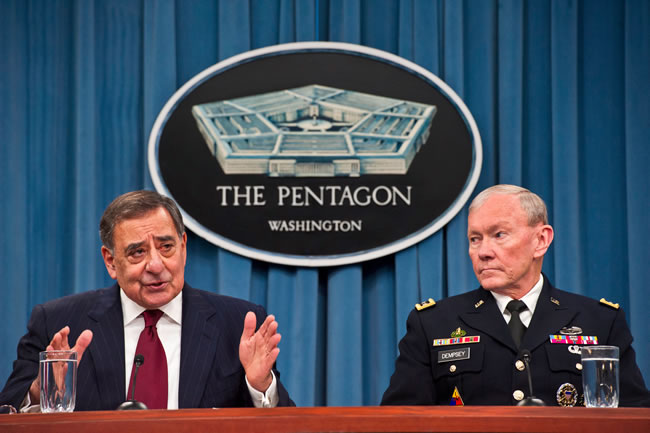 Defense Secretary Leon E. Panetta and Army Gen. Martin E. Dempsey, chairman of the Joint Chiefs of Staff, brief the press at the Pentagon, Jan. 10, 2013. Panetta and Dempsey discussed the effects of sequestration if it were to take effect at the end of March. (Photo: DOD)

Deputy Secretary of Defense Ash Carter released a memo on Thursday directing the services and defense agencies to plan for upcoming budget challenges, including sequestration.

“I therefore authorize all Defense components to begin implementing measures that will help mitigate execution risks,” the memo says, according to the American Forces Press Service. “For now, and to the extent possible, any actions taken must be reversible at a later date in the event that Congress acts to remove the risks. … The actions should be structured to minimize harmful effects on our people and on operations and unit readiness.”

The memo falls in line with comments Secretary of Defense Leon Panetta said at a Thursday press conference.

Panetta said he is asking the department’s leadership to make all plans reversible to minimize effects on military readiness during the uncertainty of sequestration, but he also acknowledged the department must prepare for the worst.

“We have no idea what the hell’s going to happen,” Panetta said. “All told, this uncertainty, if left unresolved by the Congress, will seriously harm our military readiness.”

Sequestration cuts – approximately $1.2 trillion over the next decade, half of which would come from national security – were scheduled to take place January 2, but a last minute deal by Congress delayed them until March 1.

The memo calls for all research and development and production and contract modifications that obligate more than $500 million to be cleared with the undersecretary of defense for acquisition, technology and logistics before being awarded.

For science and technology accounts, the components must provide the undersecretary and the assistant secretary of defense for research and engineering with an assessment of the budgetary impacts that the budgetary uncertainty will cause to research priorities.

Carter said any cancellations of maintenance for ships, aviation and ground vehicles should wait until at least February 15, a delay that give Congress an additional month to resolve funding disputes.

by Billy Mitchell • 7 hours ago
Defense