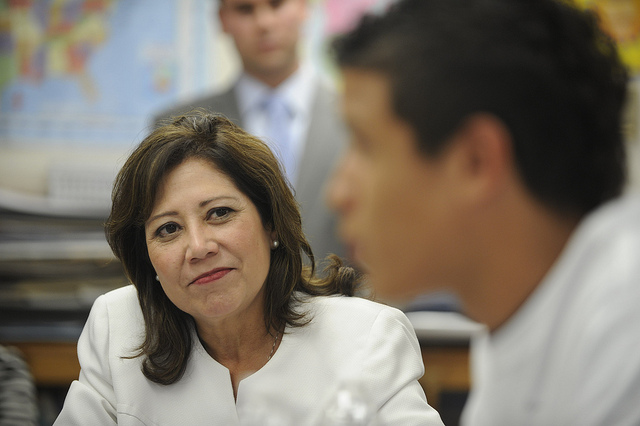 In the latest high-level personnel move, Department of Labor Secretary Hilda Solis announced she is resigning from her post.

Solis has served since the beginning of the first Obama administration, taking her post in February of 2009 after being nominated in January. Solis previously served as Congresswoman for the 32nd Congressional District in California from 2001 to 2009.

She is the 25th person and first Hispanic woman to serve as Secretary of Labor.

Over her long career in public service – as an advocate for environmental justice in California, state legislator, member of Congress and Secretary of Labor – Hilda Solis has been a tireless champion for working families. Over the last four years, Secretary Solis has been a critical member of my economic team as we have worked to recover from the worst economic downturn since the Great Depression and strengthen the economy for the middle class. Her efforts have helped train workers for the jobs of the future, protect workers’ health and safety and put millions of Americans back to work. I am grateful to Secretary Solis for her steadfast commitment and service not only to the Administration, but on behalf of the American people. I wish her all the best in her future endeavors.

No announcement was made as to her future plans or who her successor would be.

by Billy Mitchell • 14 hours ago
Tech