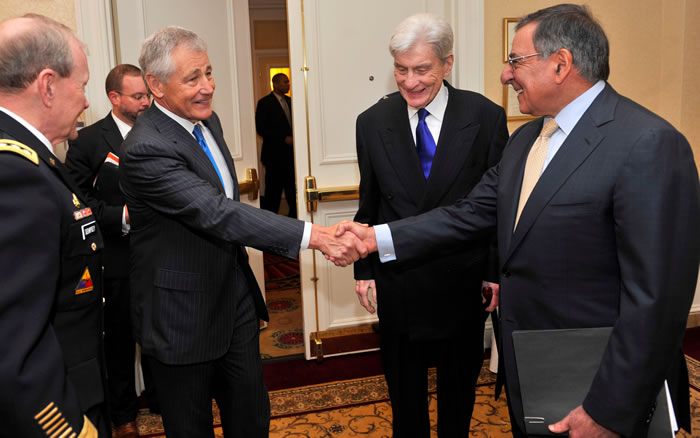 President Obama solidified his national security team for his second term on Monday, announcing he will nominate former Sen. Chuck Hagel as the next secretary of defense and White House counterterrorism advisor John Brennan as director of the Central Intelligence Agency.

“Chuck Hagel is the leader that our troops deserve,” Obama said. “He understands that sending young Americans to fight and bleed in the dirt and mud is something that we only do when it’s absolutely necessary.”

A Vietnam War veteran with two Purple Hearts, Hagel previously served as Nebraska senator from 1997 to 2009 where he served on the foreign relations and intelligence committees. He also served as deputy administrator of the Department of Veterans Affairs under President Ronald Reagan.

He has a long-history of industry success as well, co-founding Vanguard Cellular, serving as president of the investment banking firm the McCarthy Group and CEO of American Information Systems, a computerized voting machine manufacturer.

“As I saw during our visits together to Afghanistan and Iraq, the troops see a decorated combat veteran of character and strength,” Obama said. “They see one of our own.”

If confirmed, Hagel would be the first enlisted soldier, and first Vietnam veteran, to serve as the nation’s Secretary of Defense.

In a short statement, Hagel thanked Obama “for this opportunity to serve this country again, especially its men and women in uniform. … These are people who give so much to this nation every day.”

Brennan has helped create the White House’s aggressive counterterrorism strategy the past three years, focusing on the increased use of drones.