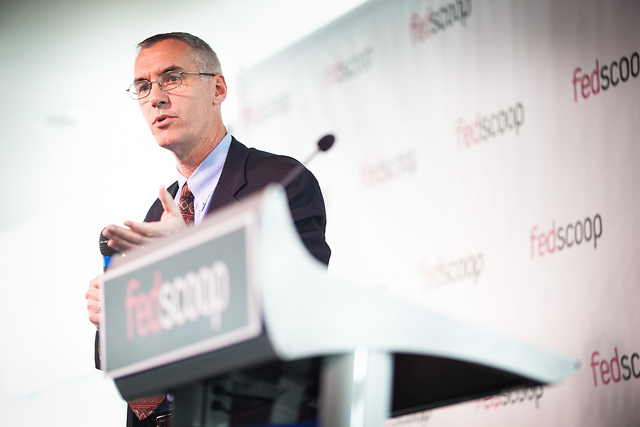 A Department of Homeland Security Official confirmed to FedScoop that Chief Information Officer Richard Spires is on elected leave, but could not discuss the reasons for it.

The official, who requested anonymity because the situation is a personnel matter, did confirm that Spires’ leave of absence is “not related in any way” to the congressional testimony he delivered on February 27 or the testimony he was scheduled to deliver on March 19.

On February 27, Spires testified before the House Committee on Government Reform on how to fix the federal information technology procurement system. In that testimony, Spires discussed challenges the department faces in procuring IT goods and services and offered some solutions.

He also pointed to the U.S. Department of Veterans Affairs, which put in strong oversights for technology projects through its Project Management Accountability System, as an example for the rest of government.

“I am a CIO today because information technology has the ability to meaningfully and measurably improve the mission and business effectiveness of government,” Spires said. “I have six billion dollars to spend and don’t want to waste a penny of it.”

On March 19, Spires was scheduled to testify before the House Committee on Homeland Security, Subcommittee on Oversight and Management Efficiency on a hearing titled “DHS Information Technology: How Effectively Has DHS Harnessed IT to Secure Our Borders and Uphold Immigration Laws?”

Spires did not attend the hearing because he was on leave at the time (his leave began March 15) but his official statement was posted online. Deputy CIO Margie Graves, who is now acting CIO, testified in his place.

The DHS official said Spires met with the subcommittee chair to discuss topics related to that hearing.

On the same date, the Government Accountability Office released a report looking at information technology investments within DHS.

The report said 47 out of 68 major IT investments were meeting cost and schedule commitments. The remaining 21 – representing about $1 billion in total cost – had one or more subsidiary projects that were not meeting requirements, GAO said.

He has extensive experience in both the public and private sectors.

He served as the Internal Revenue Service from 2004 to 2007, serving as Associate CIO and later CIO. He joined DHS as CIO in 2009.

Before IRS, he was president and chief operating officer at Mantas, Inc. from 2001 to 2003. Spires also worked as SRA International for 17 years, raising to the role of senior vice president and serving as one of the founders of the company’s commercial business initiatives.

FedScoop first reported the new of Spires’ departure on Monday.

by Jackson Barnett • 18 hours ago
Tech