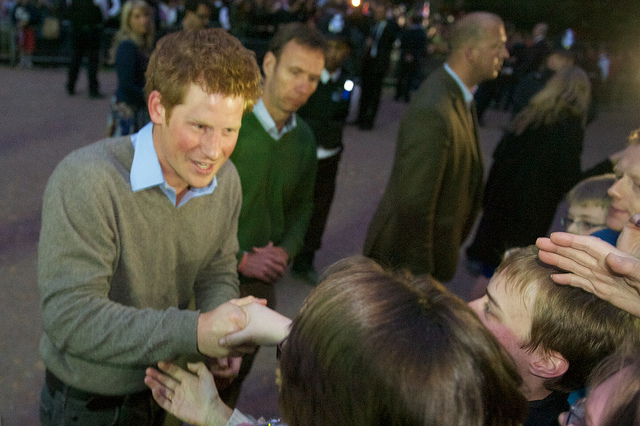 Despite what happened in Vegas, the British royals are taking a gamble on Prince Harry.

St. James Palace announced Monday the prince will return to America in May, and his tour will include a visit to Washington, D.C. While in town, Harry is expected to meet with lawmakers on Capitol Hill. He’s also scheduled to visit Walter Reed Medical Center and Arlington Cemetery.

Here are eight other stops in and around Washington we think are fit for a could-be king!

Prince Harry knows his way around a polo field, so he would feel quite at home on the storied Sagamore Farms, just a few miles from Washington in Glyndon, Md. Purchased in 2007 by UnderArmour CEO Kevin Plank, Sagamore is rich in thoroughbred history and British ties. Once owned by American royalty – the Vanderbilts – the farm’s first stud was the English Triple Crown winner Bahram from the Aga Khan III, and at one time the Queen Mum kept a broodmare of her own on the land.

There’s plenty of time for soccer when Harry’s home in England. While in the U.S., take him out to the ball game!

Perhaps it’s that spicy ginger mane that suggest Harry might bore quickly strolling through museums here in Washington. Why bother, really, when the iconic work of one of America’s most celebrated artists is hanging at the residence of the British ambassador. Surely Harry will pop in to see “Granny”, as painted by Warhol, in pop art?

Continuing the legacy of Princess Diana’s work, Prince Harry dedicates much of his charitable efforts to helping people who suffer from HIV. For decades, Washington’s Whitman-Walker Health Clinic has been a world leader in HIV research and care.

Where better for Harry to reflect on his great-grandmother, Queen Elizabeth I, and recall her resolve when German bombs attacked Buckingham Palace. A photo opp at this gorgeous American monument may also erase all memories of the playful prince’s unfortunate and infamous swastika armband costume.

The Junior League of Washington

Duchess Catherine needs a sister-in-law. Harry has suggested to the press before that it’s not easy finding a lady willing to take on the duties of being his better half. With a membership dedicated to community service, surely there’s a contender for a future HRH among the ladies of the JLW.

He’s months away from becoming the world’s most famous uncle.  Harry could find a special gift or two for Baby Cambridge at one of the DC-area Dawn Price Baby boutiques.

photo here – Credit:  Kimpton Hotels
With the Capitol in the skyline, the view from Donovan House Hotel’s rooftop pool shows Washington in all its crowning glory. Though not the poolside scene the prince came to know in Vegas, by day Harry would find a discreet (from 7am to 5pm the pool is for hotel guests only) retreat. As the sun goes down, the bar opens up creating a swanky nightlife scene. We’re guessing Harry wouldn’t shy away from a cocktail after a long day of royal duties.