The pilot will service the company’s AmazonFresh program, which is intended to deliver fresh, perishable groceries ordered online to customers in the city. Postal Service involvement will take place tentatively until the end of September and will use USPS vehicles to deliver groceries between the hours of 3 a.m. and 7 a.m. The post office will not, however, deliver alcohol. 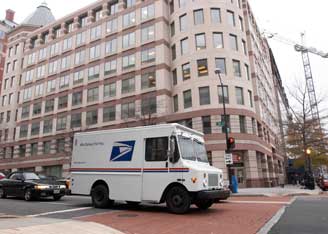 “The Postal Service is conducting an operational test with Amazon Fresh to determine if delivering groceries to residential and business addresses would be feasible from an operations standpoint and could be financially beneficial for the organization,” USPS spokesman Mark Saunders said in an email statement.

Kelly Cheeseman, a spokesperson for Amazon, said in an email the company is “always looking for new and innovative ways to deliver packages to customers.”

Financial benefit is important for the cash-strapped post office, which has posted more than $3 billion in losses in the first and second quarters combined. A white paper released by the agency’s inspector general encouraged the agency to develop new strategies to tap into the e-commerce market and help cut some of those losses. In fact, in the USPS OIG’s strategic plan for 2014-2018, the agency recommends that the Postal Service make an effort to capture part of the $1.5 trillion e-commerce market.

The move toward a collaboration between the Postal Service and Amazon comes after the two already partnered in 2013 to bring Sunday delivery service to customers in New York and Los Angeles.

That project was successful – according to a statement from the USPS, the relationship expanded in May 2014 to include 15 more cities in seven states.

“As online shopping continues to increase, the Postal Service is happy to offer shipping solutions that allow major mailers and customers alike [to] appreciate the benefits of the U.S. Mail,” Saunders said in the statement. “The Postal Service is committed to meeting the evolving needs of our customers and exceeding consumer expectations. “

Despite the fact that Amazon also ships with the Postal Service’s competitors for normal online orders and that the company is investigating its own drone delivery service, the USPS said the partnership will be beneficial.

“We consider this a winning proposition for both organizations and are excited to be delivering packages seven days a week,” Saunders said.