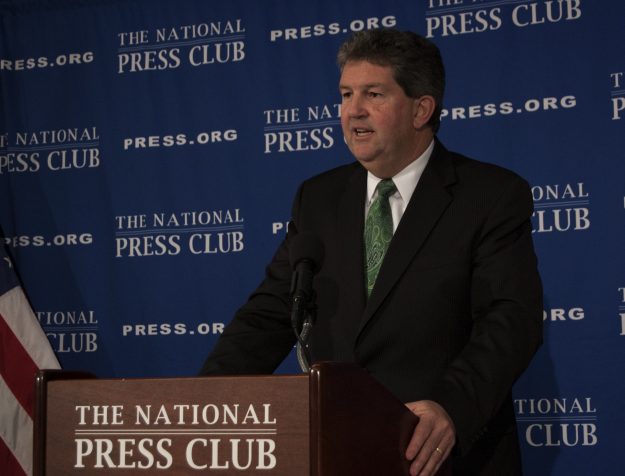 With less than a month left in his term as postmaster general, Patrick Donahoe slammed Congress, the mailing industry and postal workers unions in a farewell speech Tuesday at the National Press Club.

Donahoe said the Postal Service could operate profitably, adapt to changes in the marketplace and meet the independent agency’s full potential as an engine for mailing industry growth. What he said the post office couldn’t do, however, was operate within the current business model.

Donahoe pointed in particular to a congressionally mandated requirement that the agency prepay the next 40 years’ worth of retiree health benefits for current employees within the next decade.

He added, “We could have been able to pay [that mandate], if the Internet had never been invented.”

The outgoing postmaster general didn’t lay the blame completely on Congress: Donahoe also took aim at unions and the mailing industry as a whole. 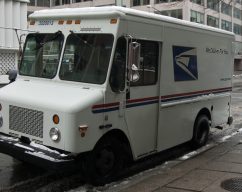 “Rather than overspend on health care, we could be spending those funds on a new vehicle fleet, package sortation equipment, paying down our debt and significantly slow postage price increases,” Donahoe said. “What’s holding us up? Myopia, shortsightedness.”

Donahoe said his words for the unions might be harsh but it’s too easy to just blame gridlock in Congress for the agency’s business and financial woes.

While Donahoe said the labor unions focused their attentions on preserving jobs and benefits, the agency had not had any layoffs. A bigger threat to the agency, he said, is not embracing technological change and innovation.

“Technology is driving dramatic changes in delivery services — just look at how Amazon is offering one-hour delivery in New York City,” Donahoe said. “The Postal Service needs the flexibility to be a part of those changes, and more importantly, to shape those changes.

“The mailing industry views the future of the Postal Service mostly through the lens of pricing, so they don’t want the Postal Service to have greater product and pricing flexibility,” Donahoe said. “I’ve always found this very odd, because the ongoing lack of reform creates more pressure to raise prices — which is what happened this past year.”

According to Donahoe, the Postal Service put together a new business plan and a list of legislative recommendations, but that plan fell on deaf ears in Congress, and within the unions and the mailing industry.

“As much as we try to have an elevated conversation about the future of the organization, we never get beyond the narrow set of interests that are determined to preserve the status quo,” Donahoe said. “We didn’t get much support from our unions or the mailing industry — because [our new business plan] threatened the status quo.”

Attitudes have to change, and I hope they will

Optimism for next Congress

In his remarks, Donahoe endorsed a postal reform bill by Sen. Tom Carper, D-Del., and now-retired Sen. Tom Coburn, R-Okla., from the 113th Congress, and he said it was the “best look” so far at reforming USPS. The bill, however, expired at the end of the 113th Congress and will need to be reintroduced for the new session, which officially began Tuesday.

Carper, who will now be the ranking member on the Senate Homeland Security and Governmental Affairs Committee, already said Postal Service overhaul should be a top priority of the new Congress. In a late-December release, Carper said Postal Service leadership has worked hard but can only do so much without direction from Congress.

“For years, the Postal Service has worked hard to compete in the age of the Internet – keeping prices as low as possible, reducing its fixed costs, and innovating where it can. But its leadership can only do so much without new authorities from Congress,” Carper said at the time. “Congress needs to free the Postal Service of its financial and legislation constraints and give it the opportunity to modernize and grow through innovation.”

Donahoe said all the parties associated with the Postal Service needed to adjust how they approach change and innovation for USPS going forward.

“Attitudes have to change, and I hope they will,” Donahoe said. “I’ve been accused of being optimistic to a fault. Perhaps I am, but I believe this new Congress will take a fresh look at the long-term future of the Postal Service and pass the legislation we need.”

Donahoe’s farewell remarks came days after letters to employees whose worker’s compensation medical records were compromised in the September cyber intrusion at the agency were made public.

In addition, the agency has brought on a third party to examine its cybersecurity posture. Donahoe told FedScoop the results of the third party investigation would not be made public.

Donahoe leaves his post after 40 years at USPS. Megan Brennan, the agency’s current chief operating officer, will take over as the first female postmaster general in February.

by Jackson Barnett • 5 hours ago
Cyber

by Billy Mitchell • 22 hours ago
Cyber