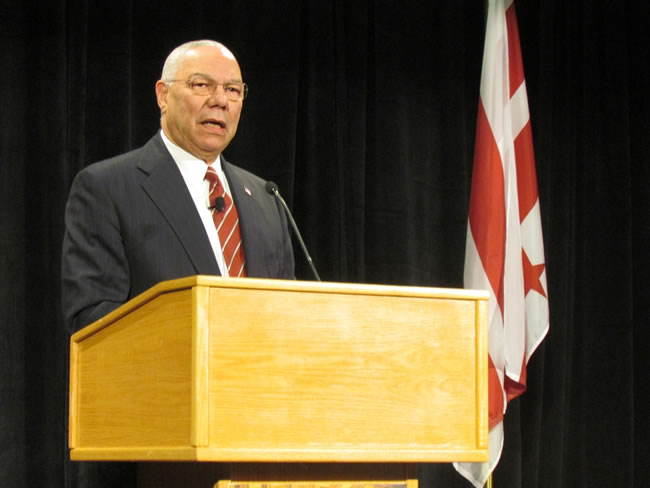 General Colin Powell said there must be a balance between security and utility when it comes to computer networks to keep the nation’s government and business running at transactional speed to compete with the rest of the world.

Speaking at this morning’s Symantec Government Symposium at the Reagan Building, Powell said that good leadership means being able to make tough choices in regards to security: Making sure systems are protected, but not so tight that they lose their value.

“When it comes to the cyber threats facing our country and its networks, the opportunities outweigh the challenges,” said Powell, the former Secretary of State, Chairman of the Joint Chiefs of Staff and National Security Advisor now working, among other places, as a venture capitalist at Kleiner Perkins Caufield & Byers in Silicon Valley.

The key, Powell said in his 45 minute speech, will be to triage the real threats and provide the proper amount of security to networks: Putting the most focus into the most important networks and investing less in others as the situation dictates.

He said that he doesn’t want to see the cyber security world turn into what TSA has done with air travel.

“We can’t let the dangers of cyberwarfare become too burdensome on our way of life because there will always be a new threat and a new weapon, but I think these are challenges we can take on without limiting the way we operate.”

Powell added that he sees cloud computing as a game-changing technology and smart phones as the ever-growing future of information sharing with everything converging into one device.

“The only thing limiting us is the size of the keyboards that I can’t manage with these over-sized hands,” Powell joked.

“In my opinion, we still live in the greatest country in the world,” Powell said. “As long as we keep moving forward and keep innovating we will remain a place that people in all other countries want to come to.”