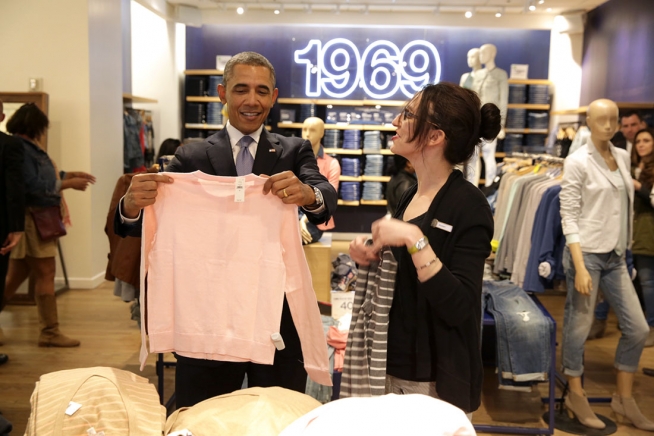 President Barack Obama looks at a sweater with Gap employee Susan Panariello while shopping for his family during a stop at a Gap store in New York, N.Y., March 11, 2014. (Photo: White House/Chuck Kennedy)

Like most dads, President Obama has strong opinions about the clothes his young daughters wear. That’s why when shopping at a Manhattan Gap store on Tuesday for Sasha and Malia, he was quick to rule out sweaters with a plunging neckline.

People magazine reports the president said, “I’m worried the V-neck is going to slip,” when a sales associated suggested the sweaters for the first daughters.

The president was in New York for a fundraiser when he made the stop at the popular retail store. He opted for two modest crew-neck pullovers for his daughters, and also a blue exercise jacket for Mrs. Obama to wear when promoting her Let’s Move initiative to reduce childhood obesity.

He left the store telling shoppers and employees he thinks “the ladies” will be impressed with his style.