A bid protest on the General Services Administration’s forthcoming $50 billion telecommunications contract vehicle has been dismissed, according to officials and documents Friday.

Mary Davie, the assistant commissioner for the Office of Integrated Technology Services in GSA’s Federal Acquisition Service, revealed in a tweet that the bid protest — filed by Staten Island, New York-based Compuline International prior to the Feb. 22 deadline for proposals on GSA’s Enterprise Infrastructure Solutions contract — had been dismissed by the Government Accountability Office. 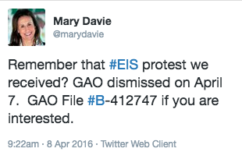 EIS is GSA’s next-generation telecom contract follow-up to its extremely popular Networx vehicle. Part of the agency’s Network Services 2020 strategy, EIS is set to be even bigger than its predecessor, and draw more competition and business into the marketplace with a range of offerings, like voice, video, cloud, network and data transport services.

In Compuline’s filed protest, it took issue with GSA’s requirement that bidders use the agency’s System for Award Management to submit their bids, because for years the company’s properties have been denied access to SAM, it claimed. Compuline asked to be allowed to submit its proposal instead by email or on thumb drives.

GAO dismissed the protest because Compuline filed comments on GSA’s protest report on April 5, missing the March 28 deadline for comments, according to the decision from Susan Poling, GAO general counsel.

At this point, GSA is still in the process of evaluating EIS proposals. Davie said she hopes soon to update GSA’s Interact platform community page for the EIS contract with an updated timeline so vendors will be able to plan for next steps.

by Jackson Barnett • 23 hours ago
Acquisition