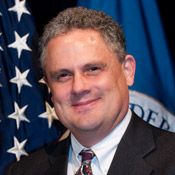 Phil Reitinger, the outgoing Department of Homeland Security Deputy Under Secretary for the National Protection and Programs Directorate, called on Congress to approve the Obama Administration’s legislative proposal to bolster the nation’s cybersecurity defenses in a number of areas.

“Our Nation is at risk,” Reitinger said Monday before Senate Homeland Security and Governmental Affairs Committee. “The cybersecurity vulnerabilities in our government and critical infrastructure are a risk to national security, public safety, and economic prosperity. The Administration has responded to Congress’ call for input on the cybersecurity legislation that our Nation needs, and we look forward to engaging with Congress as they move forward on this issue.”

Some of his key points on the proposal: