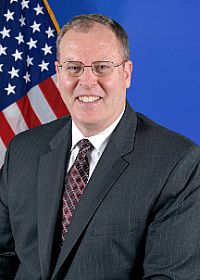 Work formally served as undersecretary of the Navy from 2009 to 2013. According to a statement from the Defense Department, Defense Secretary Chuck Hagel recommended Work.

A graduate of the University of Illinois, Work served 27 years in the Marine Corps where he commanded an artillery battery and battalion as base commander at Camp Fuji. He also held other leadership positions.

Work retired from the Marine Corps in 2001 and began work at the Center for Strategic and Budgetary Assessments. There, he was a senior fellow for maritime affairs and later became vice president for strategic studies.

He also has degrees in systems management from the University of Southern California, in space system operations from the Naval Postgraduate School and in international public policy from the Johns Hopkins School of Advanced International Studies.

Before his nomination, Work was heading the Center for a New American Security.