There’s a new show on CBS called Same Name where celebrities trade lives with everyday citizens who just happen to share their famous name. For instance, this past week boxer Mike Tyson switched lives with another Mike Tyson – a nurse and father of two in Michigan.

We did some of our own same name searching and found seven prominent federal employees and their celebrity counterparts.

The fame: Everyone knows Johnny Carson as a legendary comedian and longtime host of The Tonight Show who revolutionized late night television and became an entertainment icon.

The fed: Inside the walls of the State Department, employees think differently when hearing the words “Here’s Johnny,” as in Johnnie Carson, the Assistant Secretary of State for African Affairs. This Carson has served as an ambassador to Kenya, Zimbabwe and Uganda along with other assignments across the globe.

The fame: Actor Matthew Perry played Chandler Bing on the popular television sitcom Friends for 10 years, and appeared on other hit shows like Scrubs, The West Wing, The Simpsons and Beverly Hills 90210 and a number of movies.

The fed: Mathew Perry is the Chief Information Officer at the Office of Personnel Management. We asked Matthew about his name and he jokingly said he only uses it if he’s trying to get a tough dinner reservation.

The fame: Andrew Jackson was the seventh President of the United States, known best for creating the Democratic Party and abolishing the national bank.

The fame: Kenny Rogers is one of the most popular country singers in history with songs like ‘The Gambler’ and ‘We’ve Got Tonight.’ There’s also a Kenny Rogers who was an all-star baseball pitcher that retired a few years ago.

The fame: Jon Favreau is an actor, film director and writer known for his roles in the movie Swingers and Rudy and for directing the Iron Man movie franchise.

The fed: This Jon Favreau has been called President Obama’s “mind reader” who has been the president’s speech writer since Obama was in the Senate. Favreau is now the Director of Speechwriting at the White House.

The fame: Timothy Leary was a controversial figure in the 1960s and 1970s for advocating the benefits of LSD and was once called by President Nixon as the most dangerous man in America.

The fed: Timothy O’Leary (not the same, we know, but close enough) is the Deputy Chief Research and Development Officer, Office of Research & Development, Clinical Science R&D Service at the Veterans Health Administration. Oddly enough, both Leary and O’Leary are each doctors. 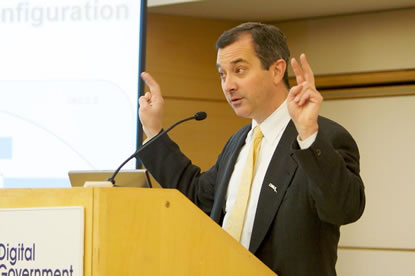 The fame: Not so much here in the states, but Henryk Sienkiewicz was a popular Polish noveslist and journalist at the turn of the 19th century and won the Noble Prize in literature in 1905.

The fed: Henry Sienkiewicz is the Chief Information Officer at the Defense Information Systems Agency and will be speaking at FedScoop’s Lowering the Cost of Government with IT Summit on Aug. 24 at the Newseum.

Know of other famous ‘Same Name’ feds? Share in the comments.