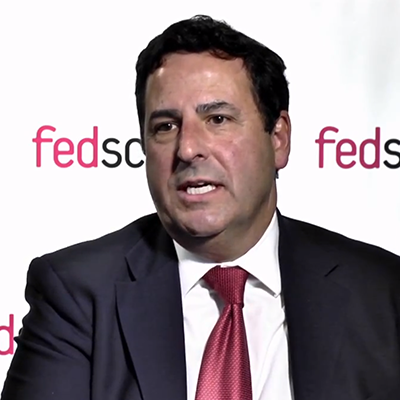 SEC’s CIO, Thomas Bayer, will leave his post in October and return to the private sector.

When Thomas Bayer arrived at the Securities and Exchange Commission, the agency’s IT infrastructure was underfunded and inefficient. Now, four years later, as Bayer prepares to leave his position as the chief information officer, the commission is saving money yearly on its operating and maintenance budget and investing that money back into new IT initiatives.

“I got there just after the financial crisis had occurred,” Bayer said. “I was blessed with having good funding from Congress and commitment from my chairman and the commission that they would invest heavily in information technology in order to modernize and transform the SEC.”

In 2010, when Bayer came on board as CIO of SEC, the agency’s website was receiving about 100 million hits a month. Now, the site receives more than 2 billion hits per month.

“That was a dramatic change,” Bayer, a FedScoop FedMentor, said. “We outsourced [the website] to the cloud and that allowed us to reduce our bandwidth by 37 percent. We had faster page refreshes and better security from a denial-of-service perspective.”

During his tenure at SEC, Bayer helped create the agency’s IT transformation plan – an ongoing strategy that promotes service agility, data transparency and simplification. The principles of the plan help the agency reform its IT infrastructure centers around the “working smarter” principle, Bayer said.

By working smarter, the agency saved $18.8 million in O&M costs last year under Bayer’s watch. Those savings weren’t sent somewhere else in the agency, Bayer said, but instead used to invest in other IT projects.

“All that money that we save goes into building new infrastructure or building new applications for the SEC,” Bayer said. “We’re not cutting it and moving it into some other spot within the SEC, we’re continuing to invest it in IT in order to continue to transform the SEC.”

Bayer’s departure four years after taking over the CIO spot came at a natural time, he said. A release from the SEC said he’ll say his goodbyes in October.

“I felt like the program was in a really good place,” Bayer said. “I’ve got great staff, I have great customers, everyone understands the importance of how technology can transform the SEC. I feel really comfortable leaving the program at this time.”

But that doesn’t mean there isn’t work to be done, Bayer said. Although he wished he had been able to complete it during his tenure, the next SEC CIO will continue the IT transformation agenda.

“This is the time to go,” he said. “I really wish that we could’ve accomplished all of [the IT transformation], because as we accomplish our goals in that transition, we find that our staff works more efficiently and effectively.”

After SEC, Bayer doesn’t necessarily know what is next for him; however, the CIO will leave the agency in October and is exploring a return to the private sector, where he worked before he came to the federal government. There’s no word yet on a successor either, Bayer said.

In addition to tackling the IT transformation agenda, Bayer said the next CIO will need to continue to increase the agency’s capability to analyze data in real time to look for risk outliers and other attributes.

In a statement released last week, SEC Chair Mary Jo White said Bayer’s impact will be felt at the agency into the future.

“Tom’s leadership and vision have had a tremendous impact that will continue to shape the SEC for years to come,” White said. “Tom’s legacy will be an SEC that increasingly leverages technology to protect investors and strengthen our markets.”

by Dave Nyczepir • 1 week ago
Cyber