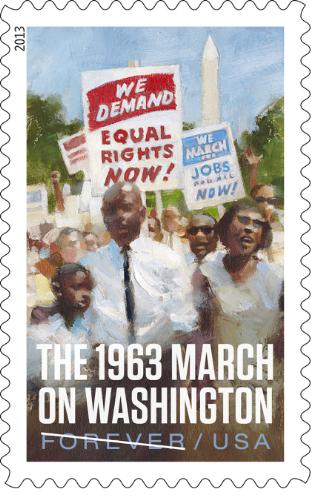 The U.S. Postal Service puts its final stamp on civil rights equality with the release of the 1963 March on Washington Forever stamp.

“It is so appropriate and so fitting for the U.S. Postal Service to issue this Forever stamp on the eve of the 50th anniversary of the March on Washington,” said Rep. John Lewis (D-Ga.), the last surviving speaker from the march. “The march was one of the turning points in the ongoing struggle for civil rights and social justice in America. In the years to come, when individuals use this stamp, they will be reminded of the distance we have come and the progress we have made as a nation. And they will be reminded of the civic duty of every American to stand up for what is right in our democracy.”

This stamp is the last of three stamps issued this year as part of a civil rights series commemorating courage, strength and equality in America. The first Forever stamp marked the 150th anniversary of the Emancipation Proclamation in January, while the second Forever stamp honored Rosa Parks on the 100th anniversary of her birth in February.