Lawmakers want to know how it’s possible the federal government can spend upward of $80 billion a year on information technology and still not be on the cutting-edge of digital services.

During a Senate hearing Wednesday, members of the Senate Subcommittee on Financial Services and General Government grilled the nation’s top chief information officer, Steven VanRoekel, and Dan Tangherlini, the administrator of the General Services Administration, about the government’s long track record of major IT projects that have fallen behind schedule, gone over budget or failed altogether.

The federal IT Dashboard identifies 201 major IT programs totaling more than $12 billion that are either over budget, delayed or in danger of failing, said Subcommittee Chairman Sen. Tom Udall, D-N.M. These are “$12 billion in question marks. That is not acceptable to any of us,” he said.

Sen. Barbara Mikulski, D-Md., who recently took the helm of the full Senate Appropriations Committee, said she’s become increasingly concerned about what she called “techno-boondoggles,” pointing specifically to IT projects at the Department of Veterans Affairs and the Office of Personnel Management as examples.

“We spend billions … on technology projects that are often ineffective or lacking in utility,” Mikulski said. The federal government has spent more than $600 billion on IT investments over the last decade, she said. “And often, we end up doing it again and then again and then again. And I think it’s time we get our arms around this.”

Federal agencies plan to spend $82 billion on IT in fiscal year 2014, according to the Office of Management and Budget. But a review of OMB’s IT Dashboard as of April 2014 shows that 201 of the government’s 760 major IT investments—totaling $12.4 billion—are in need of significant or urgent attention.

And the IT Dashboard itself is in need of improvements, said David Powner, director of information technology management issues at the Government Accountability Office.

“Our work has shown that several investments, like [the Energy Department’s] supercomputers, are not listed on the dashboard,” Powner said. “Ratings need to be more accurately reported. There are clearly more than 200 projects that are high or medium risk.” 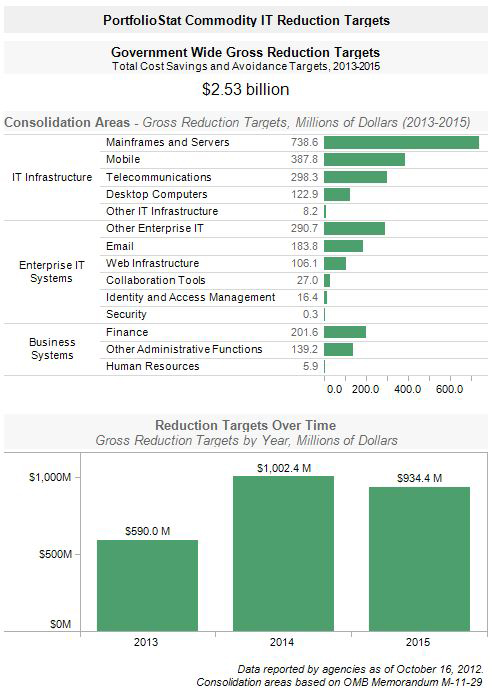 Federal agencies have identified 98 consolidation opportunities targeted to provide the federal government $2.5 billion in reductions to planned commodity IT spending over the next three years.

Powner gave high marks to OMB’s PortfolioStat initiative, which requires agencies to conduct annual reviews of their IT investments and make decisions on eliminating duplication. GAO reported that agencies continued to identify duplicate spending as part of PortfolioStat and that the initiative has the potential to save at least $5.8 billion by fiscal year 2015.

GAO also praised VanRoekel for his decision in 2010 to begin a regular series of face-to-face meetings with agency leaders, known as TechStat sessions, to make decisions to turn around or terminate failing IT programs. But OMB reported hosting only two TechStat sessions last year, after having delegated them to agency CIOs.

“Clearly, this is not enough,” Powner told the committee.

VanRoekel said the Obama administration has worked steadily to stop the growth in IT spending. In the decade prior to President Barack Obama taking office, the federal government’s IT budget increased at a compound annual growth rate of 7.1 percent a year, VanRoekel said.

“If spending had increased at the same rate during this administration, our current IT budget request would total $117 billion,” he said.

One of those efforts involves a $20 million request in the fiscal year 2015 budget for what VanRoekel described as an IT oversight and reform fund.

“This fund will use data, analytics and digital services to improve the efficiency, effectiveness and security of government operations,” he said.

It would also help establish the Digital Service, which VanRoekel described as “a centralized, world-class team made up of our country’s brightest digital talent.” The group would work closely with GSA’s new 18 F delivery team to establish standards to bring the government’s digital services in line with industry best practices, VanRoekel said.

“This capability … is being incubated now under my office in OMB,” he said. If funded, the administration plans to expand the Digital Service in 2015.