The Internet of Things is so much more than a Google-backed thermostat or a refrigerator that connects to Facebook.

The expansive possibilities of IoT were on display Wednesday at the Walter E. Washington Convention Center, as the first-ever SmartAmerica Expo showcased 24 projects from more than 100 different public agencies, private companies and academic institutions. The expo was part of the SmartAmerica Challenge, which launched in December as a call to action to show how the Internet of Things, or cyber-physical systems, can have serious socio-economic benefits for the country.

“This isn’t gee-whiz technology for the sake of technology,”  said White House Chief Technology Officer Todd Park during a keynote session. “As you listen to presentations and watch demonstrations, think about the potential massive societal benefits of the technology involved.”

While all the projects showed how IoT can revolutionize everything from cars to public water systems, a number of projects stood out to us.

A autonomous vehicle that is part of the U.S. Army ARIBO program, on display at the SmartAmerica Expo at the Washington Convention Center on Wednesday, June 11, 2014.

While Google’s efforts for autonomous vehicles rack up headline after headline, a public-private partnership is working on its own driverless vehicle program.

The U.S. Army’s Tank Automotive Research, Development and Engineering Center (TARDEC), along with a number of private and academic partners displayed its Applied Robotics for Installations and Base Operations, or ARIBO, program, which aims to study robotic vehicles in real-world settings.

ARIBO is currently being tested in a pilot program where autonomous electric vehicles are shuttling people around Fort Bragg, North Carolina and West Point.

The program is also geared toward building a network using surrounding infrastructure (think sensors on stop signs or buildings) that would allow autonomous vehicles to communicate with the network or one another.

“If there is a blind corner with a hill where lasers detect objects 90 percent of the time, that’s great, but it’s not 99.999 percent,” said Edward Straub, a robotics engineer with TARDEC and program manager for ARIBO. “If we augment that corner with a camera or a fixed sensor that detects those things, now you’re even more effective than a human being.”

The pilot program at Fort Bragg and West Point is allowing those responsible for ARIBO to gather data in semi-controlled situations for further deployment, including future use in war-time operations.

“Really what ARIBO is doing is marrying the technology that’s available now with the operational use case,” Straub said. “It’s not just about developing the perfect technology silver bullet, it’s how people adapt to that technology in a real world situation.” 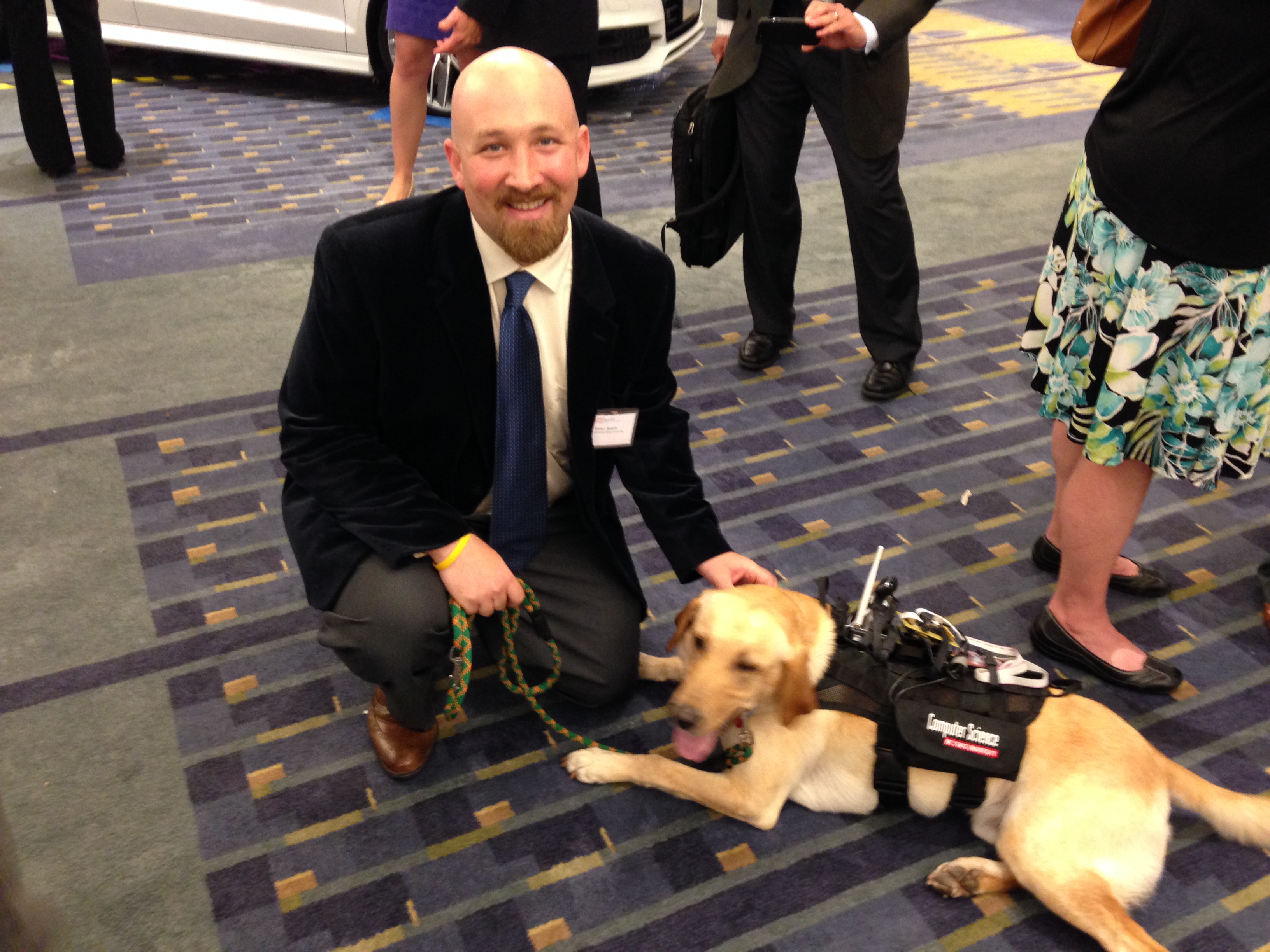 David Roberts with Diesel, a search and rescue dog that is part of the SERS program, which uses rescue dogs to collect data from disaster zones.

Two other projects that caught our eye were part of a bigger program that hopes to assist disaster response networks and help first responders quickly respond and adapt to a full range of scenarios.

The Smart Emergency Response System is a partnership between a number of schools and companies that are developing innovative, cost-effective solutions for disaster relief, including drones, robots, search sensors and rescue animals.

The rescue animal portion of the project is headed by David Roberts, an assistant professor at North Carolina State University. Roberts and his team had their two dogs, Diesel and Simba, strapped with a number of cameras, sensors and communication devices, which can be deployed in a rescue situation.

Roberts also uses inertial measurement units to calculate the behavior and physiology of the dog in real time, which then allows a command team to determine the best course of action.

While a project like this seems tailor-made for the Federal Emergency Management Agency, Roberts can see this deployed across a number of other agencies.

“The ability to do real-time monitoring of disaster recovery assets is applicable in a wide range of areas,” Roberts said. “Fighting wilderness fires, hurricanes, even on a local level, these types of technologies can be really useful.”

A robot built by Boston Dynamics as part of the DARPA robotics challenge in October. The Worcester Polytechnic Institute developed software for the robot, which was shown at the SmartAmerica Expo on Wednesday, June 11, 2014.

Another part of the SERS project that looks to be really useful is the development of software for a robot that is part of a similar tech challenge. The Worcester Polytechnic Institute has been developing software for a Boston Dynamics-built robot as part of the Defense Advances Research Projects Agency robotics challenge.

The software is geared toward helping the robot clear areas of debris, open blocked passageways or perform other types of first responder tasks. WPI has already tested the software, including a challenge where the robot navigated a car through a maze. Of 16 participants, WPI was the only to have the robot complete the maze.

“What DARPA had in mind was this: They felt the only way to advance robotics was to parallel what happened in the PC industry,” said David Cyganski, dean of engineering at WPI. “Someone had to build a piece of hardware, now they need app developers to come in and invent things like spreadsheets, word processors, etc. We’re creating the software that can make it do these things.”

You can learn more about WPI’s involvement with the robot in the YouTube video below.

by Jackson Barnett • 23 mins ago
Acquisition