Continue to FedScoop.com
Tech experts said collecting data can be good for companies and consumers. (iStockphoto)

A panel of data whizzes said consumers and students want technology companies to keep their information private — only when it’s convenient for them.

The speakers, convened by the Software & Information Industry Association, argued that there should be a level playing field in terms of how people expect their data to be collected, used and stored when they decide to use certain products.

Companies have molded their
practices based on the way consumers shop — people presumably feel comfortable
buying condoms at a self-checkout in CVS versus in person with a cashier, Wittes
said. He added that Brookings wanted to do a study on whether there was a jump
in condom sales after the big-box store installed more self-checkouts, which protects
consumers’ privacy, but the company didn’t comply.

Privacy advocates typically want stronger protections around consumers’ and students’ data, which has led to a firestorm of legislation introduced to satiate parents and educators worried about who can access their children’s information. 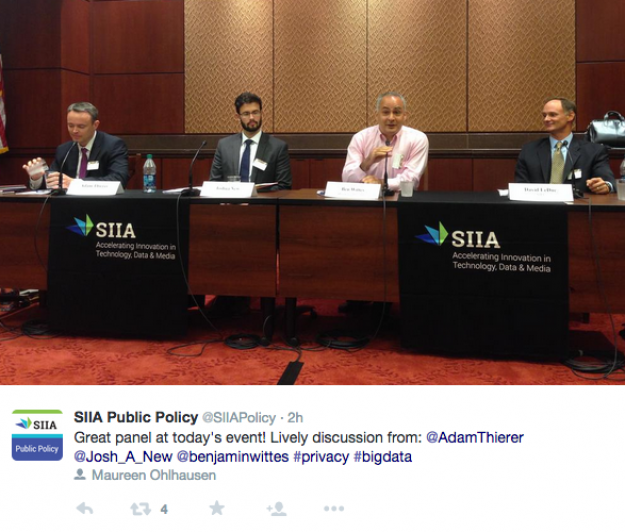 The most recent bill introduced would update the Family Educational Rights and Privacy Act, which was first signed into law in 1974.

Called the Student Privacy Protection Act, the House bill would ensure that student information on classroom technology is protected, and would prohibit schools or companies from using students’ records to advertise to them. The legislation, unveiled Wednesday night by Reps. Todd Rokita, R-Ind., and Marcia Fudge, D-Ohio, would also allow parents to opt out of sharing their children’s information.

“Mobile applications, cloud computing, and other innovative tools play an increasingly important role in a student’s education,” Rokita said in a statement. “Unfortunately, legal safeguards over student privacy have not kept pace with the rapid technological changes taking place in America’s classrooms. The bipartisan reforms in this bill will strengthen privacy protections to ensure schools can provide a 21st century education.”

But the panelists at the SIIA event, held at the Capitol, argued that more data collection in certain cases can be beneficial to consumers.

Joshua New, policy analyst at the Center for Data Innovation, said that in terms of health care, when a new drug comes out it’s important to test it on a large sample size to limit the adverse effects it may have on a range of people.

“We need to focus on collecting more data in certain cases,” he said.

Adam Thierer, senior research fellow in technology policy at George Mason University, said there are two conflicting visions about privacy. According to one theory, companies should anticipate the potential harms of new technologies and pre-emptively address them. In the other, companies should be allowed to experiment with new technologies and deal with downsides or negative effects after introducing the product to the market.

“This tension exists in every single technology debate,” Thierer said. “It all comes back to privacy.”

He argued that Americans have — and should — take the latter approach as opposed to the European model, which is to take “an extraordinarily risk-averse approach” to technology.

“America won the innovation wars in the first round with Europe,” he said.

But, he admitted, there have been costs associated with the freedom to innovate.

“If you want a freer world and more innovation and free speech, you have to understand that there’s going to be uncomfortable or distasteful elements associated with that,” he said.

He said to combat the costs of privacy, kids and adults should learn about digital ethics and citizenship so they can regulate themselves online.

“The reality is, we have basically taken the right approach in allowing innovation but narrowing our focus to the truly harmful scenarios instead of the hypothetical ones,” he said.