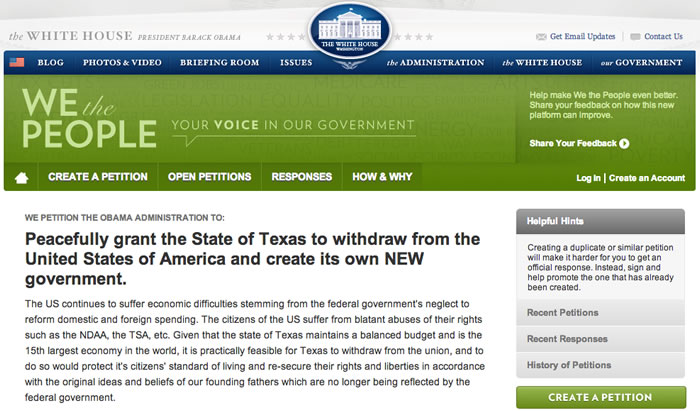 Unhappy voters from 20 states are taking to the White House “We the People” online petition platform asking to secede from the United States.

States are calling for secession with the following message:

Peacefully grant the State of [insert state name] to withdraw from the United States of America and create its own NEW government.

Residents of Texas have already received more than 26,000 signatures, surpassing the amount needed to get an official response from the White House.

They each include the following text for their reasoning:

The US continues to suffer economic difficulties stemming from the federal government’s neglect to reform domestic and foreign spending. The citizens of the US suffer from blatant abuses of their rights such as the NDAA, the TSA, etc. Given that the state of Texas maintains a balanced budget and is the 15th largest economy in the world, it is practically feasible for Texas to withdraw from the union, and to do so would protect it’s citizens’ standard of living and re-secure their rights and liberties in accordance with the original ideas and beliefs of our founding fathers which are no longer being reflected by the federal government.

Government IT News, open government, We the People, White House