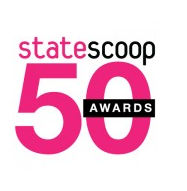 FedScoop’s sister publication StateScoop is thrilled to announce the winners of the 2014 StateScoop 50 Awards, which honor the best and brightest who make state and local government more efficient and effective.

More than 50,000 voters logged on to StateScoop last month to narrow down hundreds of reader nominations in six categories to determine the 50 visionary leaders, programs and rising stars that best highlight the transformational changes being made in state and local government.

“My team and I were delighted by the tremendous number of nominations and votes we received from our readers, ” said Goldy Kamali, CEO of FedScoop. “We are thrilled to recognize the extraordinary accomplishments of the top 50 state IT leaders from government and tech who are making meaningful contributions to their organizations and communities.”

The winners were honored with a reception at the Hilton Baltimore on Thursday that celebrated their efforts over the past year and acknowledged their tireless efforts to make a positive impact in the government community and public service.

State Innovation of the Year

State IT Program of the Year