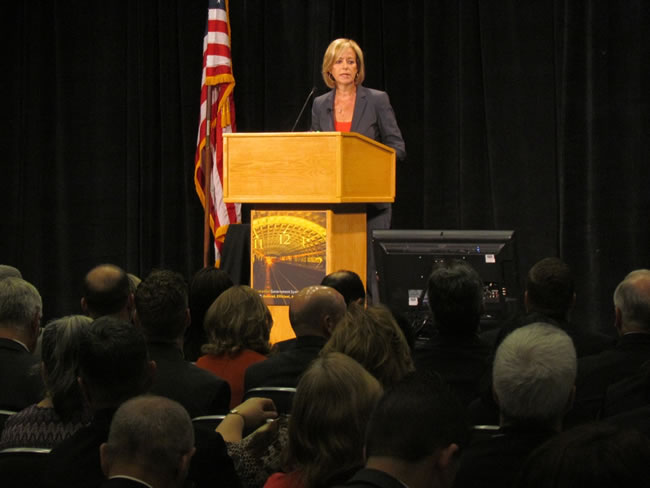 Symantec honored members of government yesterday with its Cyber 4 Awards that recognize four leaders who exemplify excellence in government cybersecurity through their contributions to programs that address cybersecurity challenges and protect our nation’s data and systems.

“Our Congressional leaders and public servants in government IT security and management are on the front lines, shaping important policy and protecting our critical data infrastructures. Symantec – along with our platinum sponsors, General Dynamics Advanced Information Systems and HP – is honored to recognize these individuals’ leadership, dedication, and innovation through the 2011 Cyber 4 Awards,” said Gigi Schumm, vice president and general manager for Symantec Public Sector at the Symantec Government Symposium yesterday at the Reagan Building.

And the envelope please …

U.S. Congress/Capitol Hill: Congressman Michael McCaul (R-TX), U.S. House of Representatives Congressman McCaul serves on the House Committee on Homeland Security, where he is chairman of the Subcommittee on Oversight, Investigations and Management, and sits on the Subcommittee on Cyber Security, Infrastructure Protection and Security Technologies. During his tenure, he has worked tirelessly and on a bipartisan basis to push for greater security of our federal networks. He is a co-founder and co-chair of both the Congressional Cyber Security Caucus and the Congressional High Tech Caucus, and is vice chair of the Speaker’s High Tech Working Group. He has been instrumental in raising awareness about proactively addressing cybersecurity, while embracing the importance of technology innovation and a strong public-private partnership to combat threats and protect our national critical infrastructure. Cyber 4 recognizes Congressman McCaul as one of today’s leading cybersecurity advocates in the U.S. Congress.

Federal – Civilian: Dion Herbert, deputy, Bureau of Diplomatic Security, Office of Computer Security, Enterprise Security Services, Department of State Herbert reviews and implements new and existing cybersecurity tools for the Bureau of Diplomatic Security, the security and law enforcement arm of the Department of State. He is responsible for securing the perimeter for diplomatic missions and initiatives, assessing technology and consulting on methods to support the business goals and objectives of more than 80,000 users. Cyber 4 recognizes him today for his leadership in spurring cross-organizational discussion and real change, as well as for his role in the Department’s recent data loss prevention initiative – for which he served as the central point of management, bringing five disparate groups together to determine how they can leverage technology to improve the agency’s security posture.

Federal – Department of Defense: Tony Sager, chief, Information Assurance Directorate’s Vulnerability Analysis & Operations Group, National Security Agency Through his leadership and direction, Sager blazed the government’s path to institutionalize the development of Security Content Automation Protocols (SCAP), which uses standards to enable automated vulnerability management, measurement and policy compliance evaluation. He also supported the U.S. Air Force’s initiative to save millions of dollars by standardizing the security settings on desktops across its enterprise. This initiative spurred the Office of Management and Budget (OMB) to duplicate standard baselines for the entire federal government for improved security and reduced costs. Cyber 4 recognizes him today for championing critical security automation standards and serving as a key liaison between industry and government agencies to develop consensus on standards and protocols.

State and Local: Alex Pettit, chief information officer, Office of State Finance Information Services Division, State of Oklahoma Pettit was appointed as Oklahoma’s first state chief information officer in April 2010. His first key initiative was to evaluate the State’s security posture and develop a plan to provide measurable, standardized security policies and procedures across agencies. He has also worked with the state Legislature to introduce HB1304, which would consolidate many IT functions under his management. Cyber 4 recognizes him today for his focus on driving security and IT processes standardization across the state of Oklahoma, as well as for his dedication to disaster recovery planning, crisis leadership and emergency operations.