It’s supposedly taken down The New York Times, The Washington Post, Huffington Post and Twitter in the last week alone. And on Labor Day, it came after the U.S. government.

The Syrian Electronic Army, a hacker group supporting the Syrian regime, has been launching cyber-attacks for most of Syria’s two-year civil war. But its U.S. hacking efforts have ramped up over the last week as the administration and Congress debate whether to launch military strikes against the Syrian government.

Visitors Monday to “www.marines.com,” the Marines’ official recruitment website, were redirected a black page with a 10-line letter addressed “Message to the United States Marines corps.” The letter called for Marines to support the Syrian regime’s soldiers, “who have been fighting Al Qaeda for the 3 years.” 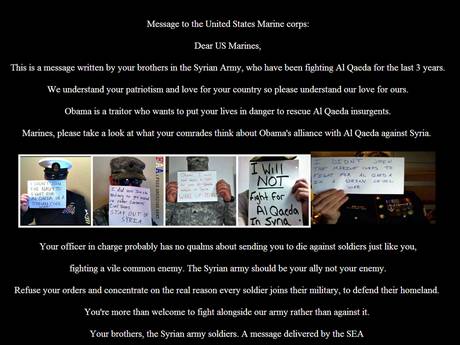 Screenshot of the letter (Image: The Independent)

The middle of the letter was broken up by five images of men in U.S. military garb, holding signs in front of their faces reading things like “I Will NOT Fight for Al Qaeda In Syria.”

The attack comes shortly after the FBI and Department of Homeland Security warned of a heightened risk for cyber-attacks from Syria, and the Pentagon has actually been working to strengthen military website security. Marines officials said Monday no information had been compromised by the attack.

Here’s the letter, in full:

This is a message written by your brothers in the Syrian Army, who have been fighting Al Qaeda for the last 3 years.

Obama is a traitor who wants to put your lives in danger to rescue Al Qaeda insurgents.

Marines, please take a look at what your comrades think about Obama’s alliance with Al Qaeda against Syria.

Your officer in charge probably has no qualms about sending you to die against soldiers just like you, fighting a vile common enemy. The Syrian army should be your ally not your enemy.

Refuse your orders and concentrate on the real reason every soldier joins their military, to defend their homeland.

You’re more than welcome to fight alongside our army rather than against it.

Your brothers, the Syrian army soldiers. A message delivered by the SEA