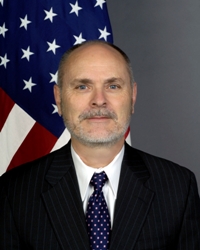 Steven Taylor has been serving as acting chief information officer at the Department of State since the beginning of August.

Taylor, the former deputy CIO and chief technology officer of operations at State, temporarily replaces Susan Swart who left her post at the end of July after more than four years as the agency’s CIO.

Taylor is a 24-year veteran of the State Department, joining the Foreign Service in 1988.

Steven C. Taylor, a member of the Senior Foreign Service with the rank of Minister Counselor, was appointed as the Acting Chief Information Officer (CIO) for the Department of State on August 1, 2012. As Acting CIO, he is responsible for the Department’s information resources and technology initiatives and provides core information, knowledge management, and technology (IT) services to the Department of State and its 260 overseas missions. He is directly responsible for the Information Resource Management (IRM) Bureau’s budget of $310 million, and oversees State’s total IT/ knowledge management budget of approximately one billion dollars.

Preceding his assignment as Acting CIO, he was the Department’s Deputy Chief Information Officer (DCIO) and Chief Technology Officer of Operations from June, 2011.

Mr. Taylor served in a number of prominent positions in the Department, including Minister Counselor for Management, Director of the Department’s Worldwide Messaging Systems Office, SMART Program Director, and Counselor for Communication and Technology. Prior to his DCIO assignment, he served as Management Counselor in Cairo and Athens. His other overseas assignments include Baghdad, Berlin, Bonn, London, Moscow, and Rabat.

Mr. Taylor joined the Foreign Service in 1988. He holds a Masters degree in Management Information Systems, and earned his undergraduate degree in Business Management from Boston University.