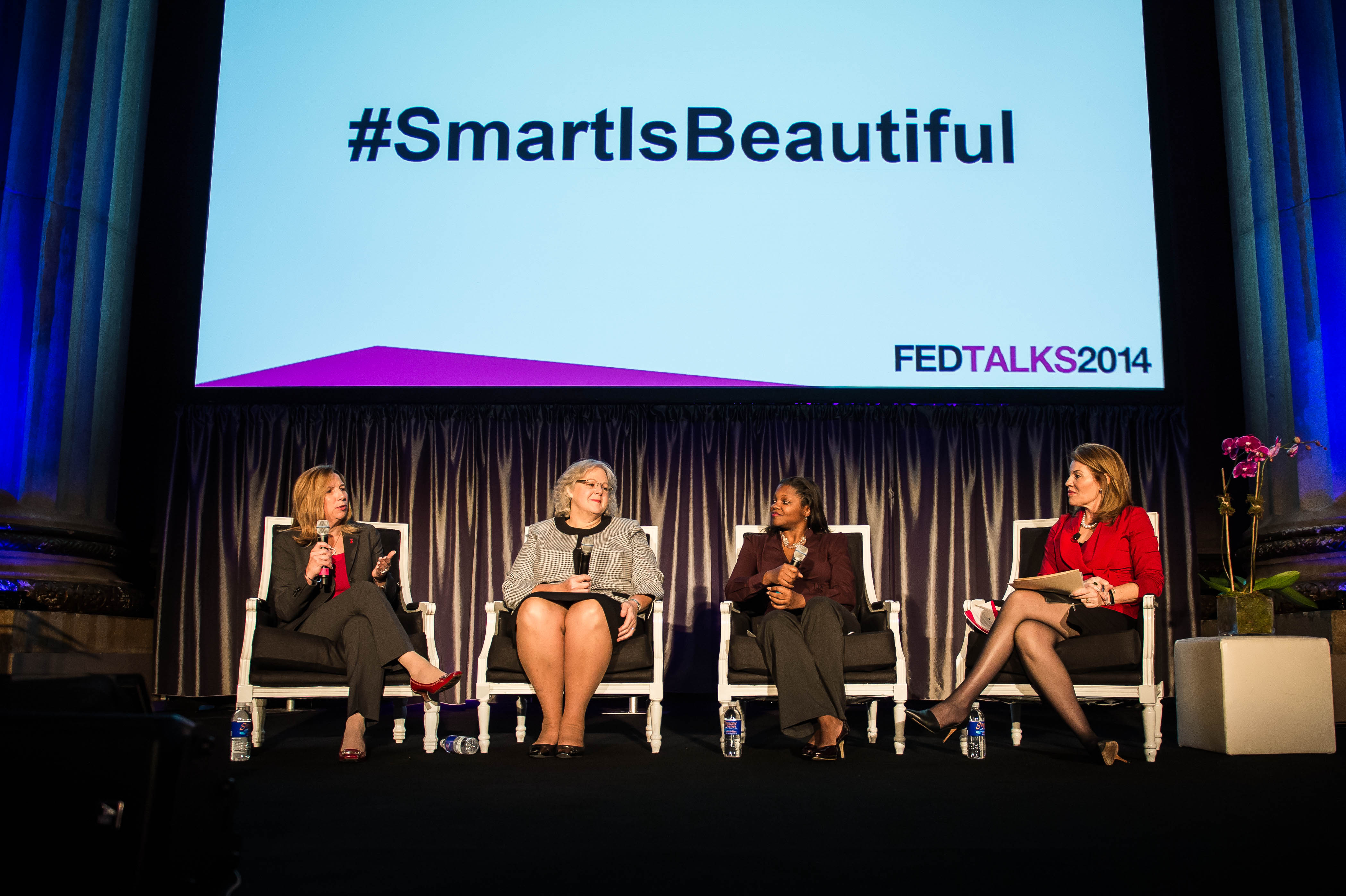 Vicki Schmanske, a vice president at Lockheed Martin Information Systems & Global Solutions; Jennifer Sanchez, an assistant division director at the FBI; Alissa Johnson, deputy CIO at the Office of Administration in the Executive Office of the President; and panel moderator Teresa Carlson, a vice president at Amazon Web Services, discuss women in technology during a panel at FedTalks on Thursday. (Credit: FedScoop)

A group of female information technology executives unveiled an initiative Thursday designed to encourage their counterparts to become mentors to young women and girls interested in high-tech careers.

Carlson, who made the announcement while moderating a panel on women in technology, encouraged the more than 1,000 members of the FedTalks audience to commit to participating in the campaign as well by tweeting #SmartIsBeautiful. TrendsMap, which monitors trending topics on Twitter, tweeted that the slogan was trending after the announcement Thursday afternoon.

Earlier in the panel, participants discussed some of the challenges of encouraging young girls to pursue careers in STEM – or science, technology, engineering and math – and helping young female professionals advance in their careers.

“Obviously women are underrepresented in the technical field,” said Jennifer Sanchez, assistant director of the IT Customer Relationship and Management Division at the FBI. Sanchez said, in their younger years, girls are just as engaged in math and science as boys. But that changes in middle and high school.

“We have to figure out how we can reach girls before they disengage,” she said.

Indeed, Carlson noted that while college women outnumber college men, women only make up about a quarter of the tech workforce. At the same time, she pointed to a project from the Bureau of Labor Statistics that predicts in 2020 there will be 1.4 million computer science jobs in the U.S.

“We need to play catch up here in the U.S.,” Carlson said.

Getting to the table is important, said Vicki Schmanske, vice president for IT and security solutions at Lockheed Martin Information Systems and Global Solutions, citing Facebook executive Sheryl Sandberg’s bestselling book “Lean In.” But for women who are already achieving at a high level in the tech world, it’s important to find a voice, she said.

“I see too many women in industry who try to change who they are to fit in,” Schmanske said. “I say be authentic because being yourself is very impactful.”

Alissa Johnson, deputy CIO for the Office of Administration in the Executive Office of the President, said among her colleagues, she’s already known for being outspoken. But whenever she sits at the table, she comes in with her reputation, her experience and her work ethic.

“I don’t just sit at the table,” Johnson said. “I bring the table with me.”