Edward Snowden, the former NSA contractor responsible for one of the most significant leaks of classified information in U.S. history, has been portrayed as many things: a traitor, a hero, a spy and a ne’er-do-well computer genius with something to prove. And until Wednesday night, he was also thought of as one of the most thoughtful, careful and meticulous whistleblowers in modern history.

But there’s one problem with the image of Edward Snowden, the meticulous, careful, big-thinking defender of privacy and anti-surveillance ninja: He stole everything at NSA but his own emails allegedly showing he tried to report his concerns about domestic surveillance to the appropriate authorities through the appropriate channels. 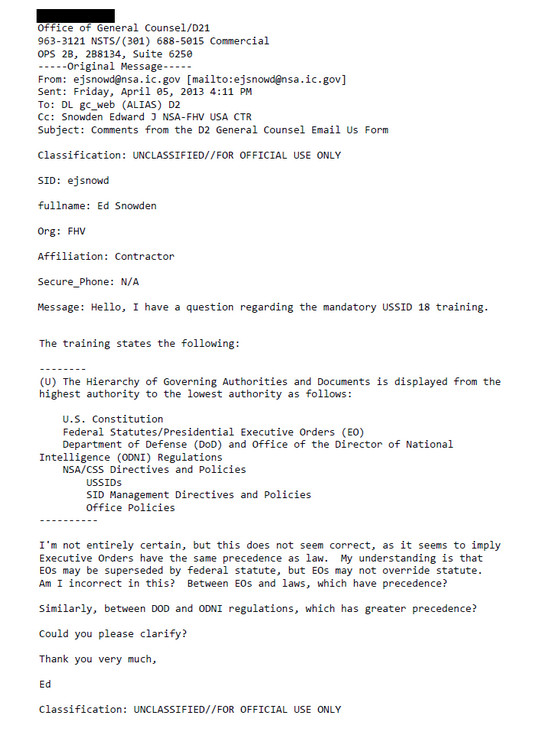 In an hour-long interview broadcast Wednesday night on NBC, Snowden told NBC Nightly News’ Brian Williams he made several attempts to bring his concerns to NSA officials in his chain of command, before deciding to leak thousands of documents detailing NSA surveillance programs to journalists.

“The NSA has the records,” he said. “And the response more or less, in bureaucratic language, was, ‘You should stop asking questions.’”

The Office of the Director of National Intelligence released Thursay the only known email from Snowden. It was a message to NSA’s general counsel in which Snowden asked for clarification on the difference between executive orders and statutes.

“My understanding is that EOs may be superseded by federal statute, but EOs may not override statute,” Snowden wrote. “Am I correct in this? Between EOs and laws, which have precedence? Similarly, between DOD and ODNI regulations, which has greater precedence?”

NSA said in a statement released Thursday that Snowden’s e-mail “did not raise allegations or concerns about wrongdoing or abuse, but posed a legal question that the Office of General Counsel addressed. There was not additional follow-up noted.”

The NSA statement also said there were “numerous avenues that Mr. Snowden could have used to raise other concerns or whistleblower allegations. We have searched for additional indications of outreach from him in those areas and to date have not discovered any engagements related to his claims.”

In an exclusive interview with FedScoop published May 22, John DeLong, NSA’s Director of Compliance, said Snowden had not brought any detailed complaints to his office. Snowden, he said, had many options available to him short of stealing the documents.

“This is one of those times. It’s a dynamic time. There’s a lot changing,” DeLong said. “What doesn’t change is accountability, respect for the law and the rule of law.”

by Jackson Barnett • 42 mins ago
Defense