Software-defined networking has for years been touted as a more efficient and cost-effective way to do networking. But a new study from Juniper Networks shows that many government and commercial organizations are still unsure if a move to SDN is a good investment.

“Last year we had a lot of hype on SDN, and we still have hype on SDN, but last year it was very, very new,” Mark Belk, national government chief architect for Juniper, said of the highly-touted network architecture that decouples traffic flow from the underlying infrastructure. “This year we see more implementation, more understanding, but the role of SDN is also changing, morphing and expanding.”

But the tide has turned a bit for SDN, Belk said, and this year it seems the technology’s role may be much more complementary than many analysts once thought. That has implications for the process’ hype cycle, a tool Gartner uses to show the life cycle of hyped technologies. “SDN is a supporting technology, a cloud-ification of consolidation of IT,” he said. “Those are really the two things driving the agenda and those hype cycles are well in their flow. The ability to automate some of the networking components is gonna accelerate or shorten the hype cycle of this whole SDN movement.” 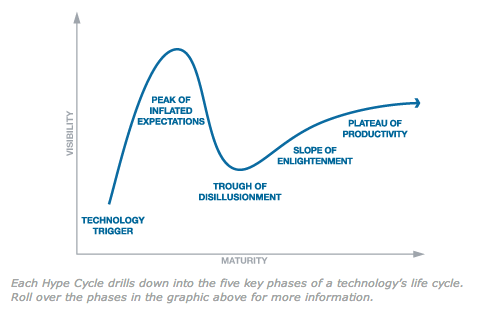 That said, in the federal space, Juniper found that advocates and critics of SDN were almost equally matched. Up 15 percent from the inaugural survey, 51 percent of federal respondents said they were “fairly aggressive in their adoption of SDN” or that “they were going to be aggressive in their adoption over the next two years,” Belk said, with the big “pulls” being simplified operations and more efficient networks. Federal adoption trailed industry and commercial businesses by about 2 percent, which Belk described as “a normal problem you have with innovation and government.” However, he expects that’s a bit low based on the number of requests for discussions he gets from the public sector.

Elsewhere, though, the federal government’s response to SDN skewed from the responses of other targeted industries (education, health care and financial).

“Fourteen percent of the government, which is about 5 or 6 percent above any of the other sectors, also thought it was gonna help improve service availability,” Belk said. “In other words, the ability to get services to market. That’s typically what you’d hear in commercial, and it’s interesting that government jumped on that as well.”

Belk also said that while about 50 percent of government respondents saw SDN as costly, a small number claimed the cost savings of the technology as a benefit. Other hurdles mentioned were employee adaptation and difficulty integrating it into existing systems. And contrary to conventional federal behavior, “The other sectors had a higher percentage [concerned] with vendor lock-in,” Belk said. “The government was actually 5 to 8 percent below. And in general the government has always had a little bit of a fear of vendor lock-in but in this particular area kind of played that down.”

The reality is SDN will probably become a supporting character in a hybrid environment, Belk said, which 63 percent of feds supported. “Those who think it’s going to be a hardware only model are laggards,” Belk said, adding that the SDN-model isn’t escapable. “Nor do I see a complete software-based model in the future either.”