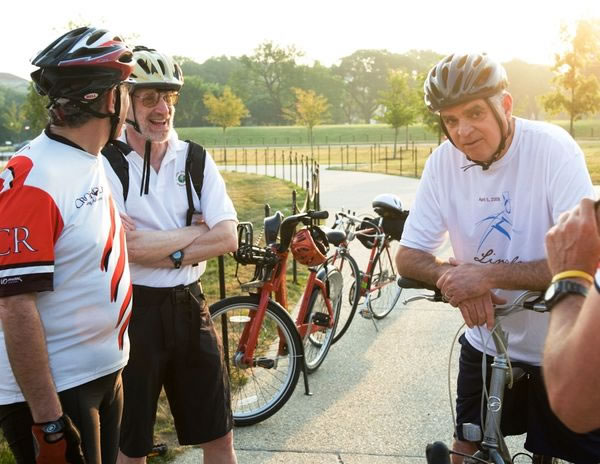 Department of Transportation Secretary Ray LaHood biked to work yesterday morning with a group of DOT commuters, riding from the Washington Monument to the agency’s headquarters.

“The route was safe and well-marked; we enjoyed some exercise; and we didn’t burn a drop of gas–which saved us some money,” LaHood wrote. “That’s what I call a successful commute.”

From his blog post on DOT.gov, LaHood outlined the agency’s role in biking in the District.

The U.S. Department of Transportation has played its part in DC’s bike-volution. For example, we helped fund development of Capital Bikeshare, a program that makes more than 1,100 bikes available to its members throughout DC and Arlington.

People can hop on a bike at one station and drop it at another. With 110 stations at transit stops, grocery stores, office buildings, and more, it’s a very convenient way to get around.

In May 2010, we also gave DOT bicycle commuters a new benefit that allows reimbursement for qualified commuting costs similar to that provided to employees who commute by public transportation.

Around the nation, we’ve been working hard to help state DOTs and communities integrate the needs of bicyclists and pedestrians in road projects. And through our TIGER program, we have funded major projects that allow Americans to safely and conveniently get where they need to go on a bike or on foot.

Ray LaHood Bikes to Work from Jay Mallin on Vimeo.