New data from the National Highway Traffic Safety Administration shows that drunk driving deaths declined by 2.5 percent in 2013; however, that’s not stopping the agency from trying to drop that number even more. On Tuesday, the agency announced the launch of the SaferRide Mobile App, designed to keep drunk drivers off the roads. 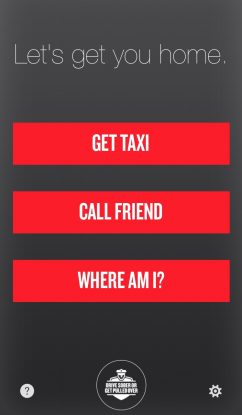 “Too many lives are still being cut far too short because of drunk driving,” Transportation Secretary Anthony Foxx said in a release. “We’re making progress in the fight against drunk driving by working with law enforcement and our safety partners, and by arming people with useful tools such as our new SaferRide app.”

Available on iOS and Android platforms, SaferRide prompts the user with text at the top of the screen saying “Let’s get you home” and gives the user the option to call a taxi, call a friend or find the user’s location. The app officially launched Wednesday and joins the already-existing NHTSA app SaferCar, which launched in February 2013.

“NHTSA encourages drivers to not drive drunk and offers the SaferRide mobile app to provide anyone who has been drinking an easy way to find a safe ride home,” an NHTSA official told FedScoop in an email.

SaferRide’s “Get Taxi” option redirects the user to a Yelp page in the app that displays the contact information for taxi companies in the vicinity, based on a user’s location.

According to the NHTSA official, there are currently no plans to integrate Uber or any other ridesharing apps into the DOT app. When FedScoop tested the application in Washington, D.C., Uber showed up as the top result and prompted the user to open the already installed app.

When setting up the app, a user can designate a specific person in their contacts list as their “friend,” so that when a user presses the “Call Friend” option, that contact is automatically called. The “Where Am I” option displays the user’s location on an in-app map.

Despite the app’s location-sharing option and integration with Yelp, the NHTSA official told FedScoop that consumer privacy would not be affected.

“Our public service app interfaces with Yelp’s content without sacrificing consumer privacy,” the official said. “The app does not automatically share the user’s location, but it does provide the user with their own location so they can share this information as needed.” 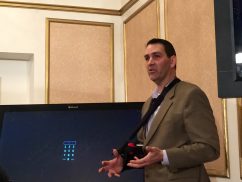 At this point in development, the official said there are no additional plans for the application, but the agency is “constantly looking for new ways that we can help keep the driving public safe.”

The launch of the app comes alongside the Transportation Department’s annual “Drive Sober or Get Pulled Over” holiday crackdown on drunk driving, the release said. In 2013, more than 10,000 people died in crashes involving a drunk driver, equivalent to one death every 52 minutes. Presumably due to the holiday crackdown, December 2013 saw the lowest number of drunk driving fatalities.

The 2014-2015 crackdown began this week and will last until New Year’s Day. According to the release, more than 10,000 police departments and law enforcement agencies will be participating in the effort.