Travelers can now visit a Transportation Department website for information on cruise lines. (Credit: iStockphoto.com)
Editor’s Note: This story was updated on November 7 to reflect a comment from the Federal Maritime Commission.

Despite not having much power over the maritime industry, the Transportation Department has launched a new website to provide cruise ship passengers with a “one-stop resource” to help plan vacations.

“DOT’s cruise ship passenger information website is an effort to provide helpful information to the traveling public,” a DOT representative told FedScoop. “Safe and reliable travel, as well as transparency, are important to the department, and providing the information from agencies with direct jurisdiction in one location will promote those goals.”

Currently, the website is a landing page that directs users to the Federal Maritime Commission — the agency responsible for dealing with problems or inquiries from passengers on a cruise line — for additional consumer assistance needs.

The website also directs two sections, vessel safety and incident reporting statistics, to the U.S. Coast Guard. According to the website, the Coast Guard is responsible for cruise ship safety and requires cruise ships to meet the requirements of the International Convention for the Safety of Life at Sea. 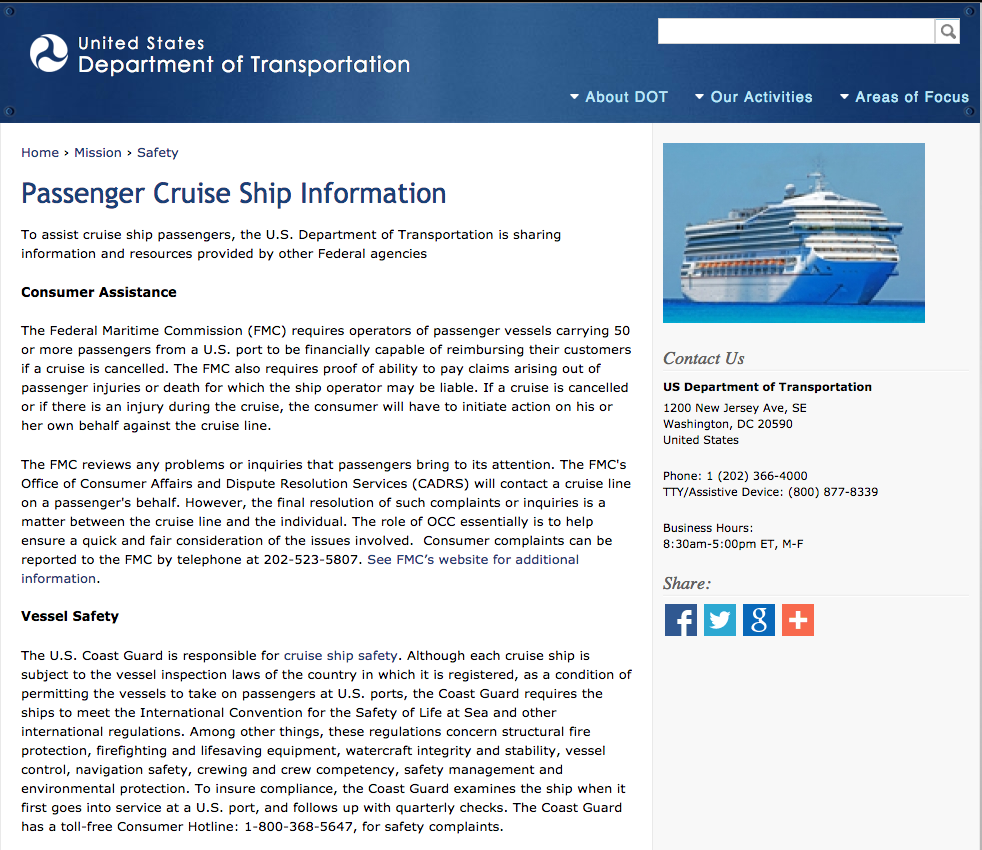 The Department of Transportation’s cruise ship information page, which directs users to the appropriate agencies to hear any claims or complaints. (Credit: DOT)

According to the DOT representative, there are currently no plans to add additional functionality to the site.

Currently, the only authority the Transportation Department has over the seas comes through the Maritime Administration, known as MARAD. The Federal Maritime Commission, an independent agency, was created under the Kennedy administration and handles the regulation of U.S. ocean commerce, while MARAD promotes America’s merchant marine and emergency reserve of cargo ships for use in times of conflict through the Transportation Department.

“The FMC welcomes the publication of information that helps educate the cruising public,” Karen Gregory, the secretary for the FMC told FedScoop in an email. “The publication of this information on the Department of Transportation’s website has already served to inform the press and the cruising public about the FMC’s services available to the public and the industry, and the FMC looks forward to collaborating with DOT on related issues.”

“While the Department of Transportation’s Maritime Administration’s and the Federal Maritime Commission’s specific responsibility for the maritime industry and commerce differ, there remain areas of overlap,” the DOT representative said. “Both MARAD and FMC interact regularly at the staff and senior levels to ensure that the U.S. marine transportation system is not only safe, but ensures the global competitiveness and national security of the nation.”

In January 2012, the Costa Concordia ran aground in Italy and tipped into the ocean. (Credit: iStockphoto.com)

However, the launch of the site didn’t come out of nowhere. In July 2013, Sen. Jay Rockefeller, D-W.Va., introduced the Cruise Passenger Protection Act of 2013, which would provide the Transportation Department with more authority to manage cruise ship incidents and investigate complaints. The bill was authored in the wake of the 2012 grounding of the Costa Concordia and the February 2013 incident aboard the Carnival Triumph, which left passengers aboard without electricity and food for several days.

Neither Rockefeller’s bill nor similar House legislation authored by Rep. Doris Matsui, D-Calif., have made it out of committee.

Despite that, Rockefeller commended Transportation Secretary Anthony Foxx in a release and called the launch of the site as “an extraordinary step” to protect cruise ship passengers.

“Passengers desperately need access to accurate and updated information, which is why Secretary Foxx’s leadership on this issue is a game changer,” Rockefeller said. “I’ve repeatedly urged the cruise industry to strengthen their consumer protections and disclosures, but they have very disappointingly failed to act.”

Foxx hailed the launch of the site as well — the Transportation secretary said the department was committed to providing the traveling public as much information as possible.

The department is committed “to making sure they know their rights before, during and after their trip,” Foxx said in a release. “We appreciate Chairman Rockefeller’s continued advocacy on behalf of the traveling public and believe this will serve as a helpful tool for consumers when choosing among cruise ships after spending years saving for that once-in-a-lifetime vacation with their family.”