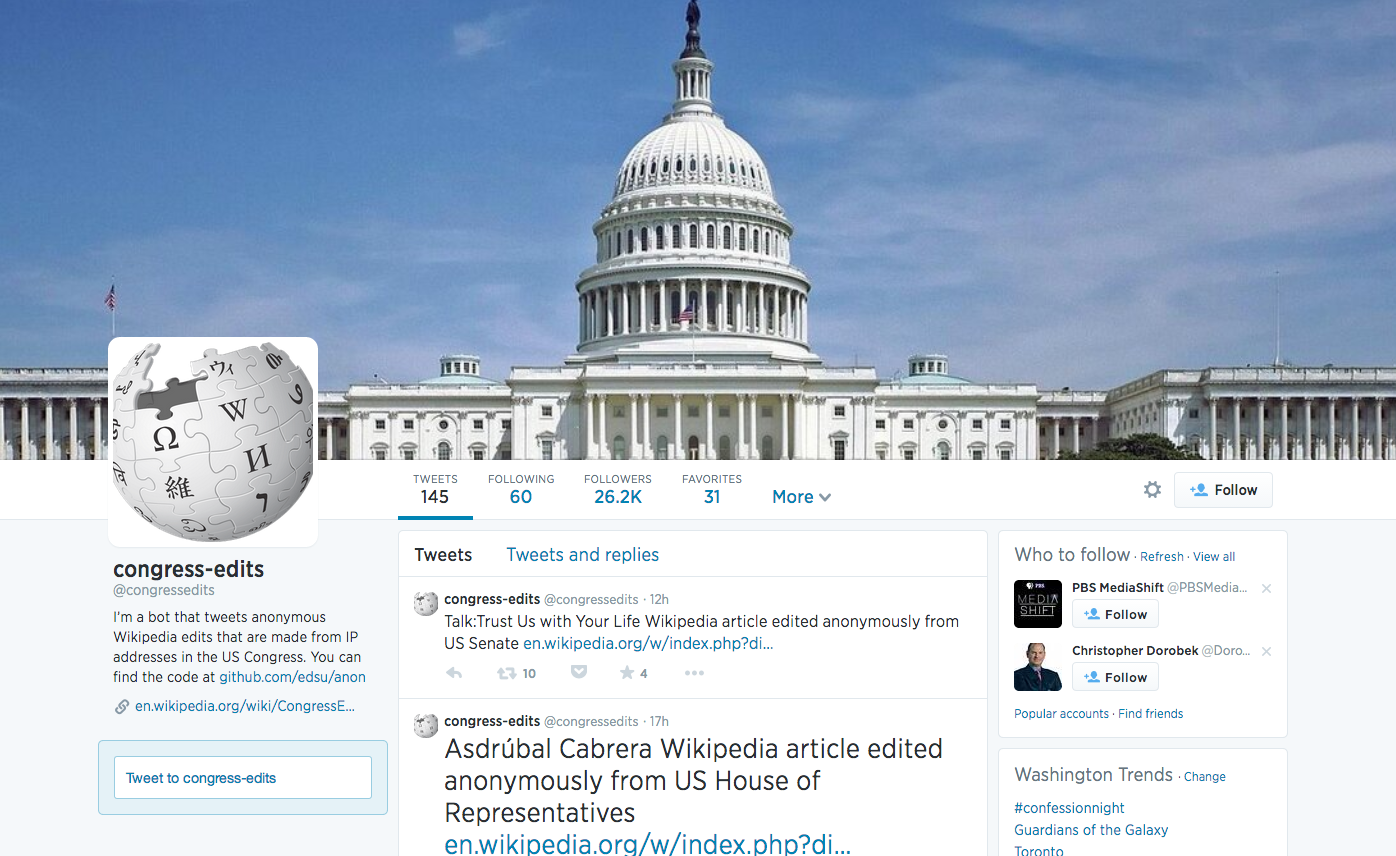 Mainstream media has been swirling with stories about the recently created @congressedits Twitter bot, ranging from hilarious pokes at congressional staffers’ taste in ice cream to the scandalous and potentially unethical editing of congressional members’ Wikipedia pages. But some advocates of the automated tool claim that it and others like it should not be thought of as mechanisms for public disgrace, but rather an encouragement for public servants to ethically participate in the Wikipedia community in a way that can benefit their agency or organization.

“Really it’s not about shaming federal government, but really it’s about changing people’s perspective on how contributing to Wikipedia is about contributing to the historical narrative,” said Dominic McDevitt-Parks, the Wikipedian in residence at the National Archives and Records Administration.”There’ve been a lot of recent scandals about PR firms editing Wikipedia deceptively and those sorts of things. One of the foundational principles of Wikipedia is that it is open. It’s had to deal with all of these issues of bias and conflict of interest, so one of the things that has come out of that is that there actually a lot of strong community social norms and policies within Wikipedia for disclosure of conflict of interests.”

Here’s how it works: Anytime somebody from a congressional IP address edits a Wikipedia page without logging in, the bot tweets out what those changes are. For instance, suppose on Thursday at about 4 p.m., someone on an IP address registered within the Senate anonymously edited the Wikipedia page for Sen. Ron Wyden, D-Ore. The nameless editor added to the page that Wyden is chairman of the Congress Joint Committee on Taxation (he is) and deleted a line describing him as a member on the Senate Special Committee on Taxation (he’s not, anymore).

The changes themselves are far from substantive or worrisome. However, because an anonymous editor with ties to the Senate — and a possible bias — made the changes in an opaque manner is enough to raise an ethical red flag. And that red flag, instead of staying buried on Wyden’s Wikipedia page edits next to an otherwise arbitrary IP for someone to blindly look for, was blasted out to the more than 26,000 followers of @congressedits.

“From the perspective of Congress specifically, congressional IPs in the past have been found making questionable edits, not so much spam edits, but more like politically-motivated edits,” McDevitt-Parks said. “Some that have made news in the past.” He noted the most malicious changes tend to occur in a “cyclical” manner, mostly around elections, and in some cases, Wikipedia has had to block federal IPs, what he called a “big issue.”

With all the media buzz, @congressedits — created in early July — is getting the spotlight, but many other bots are popping up for federal agencies and foreign governments based on creator Ed Summers’ open source code. For instance, there’s now @pentagonedits, @NSAedits and @CIAedits accounts. And while agencies face the same issues as Congress, McDevitt-Parks sees a host of opportunity if they use Wikipedia the right way.

“Any agencies need to be wary of the types of edits that might come out of their network, if the Wikipedia community or the public at large finds edits that they might find unethical,” he said. “The other side of the coin is that there are a lot of types of agencies and there are potentially ethical ways in which engaging with Wikipedia can serve their mission. So we want to make sure not to be alienated from Wikipedia.”

McDevitt-Parks speaks from experience: “At NARA, our mission is about driving access to the government records that we hold. Wikipedia is a top-five website; Archives.gov is not. So this actually serves mission to think about how we’re getting our records viewed on Wikipedia,” he said.

But contrary to what many might see as the supposed mission of @congresedits and other similar bots, McDevitt-Parks said the hope is more public servants will use Wikipedia and use it the right way, abiding by a set of best practices and with open government in mind.

“The message from this shouldn’t be that agencies are not allowed to use Wikipedia or they’re not welcome,” he said. “It’s really something that’s important for government to be involved in and doing it ethically.”