Continue to FedScoop.com
Competition for IT talent, including those with cloud computing expertise, drove up tech salaries across the U.S., according to a new national survey. (Intel Free Press)

Average tech salaries in the U.S. last year grew 7.7 percent to $96,370, according to a survey of 16,301 employed technology professionals by technology career site Dice. The jump in salaries was the biggest year-over-year leap Dice has seen since it began conducting the survey more than a decade ago.

The pay hike reflects expanding opportunities and demand for technology specialists across the country. Nearly half of respondents said their salary increase resulted from upward mobility at the same company, with 38 percent receiving a merit increase and 10 percent receiving an internal promotion.

But demand for cybersecurity, data analytics and other IT specialists continues to outpace supply, as more organizations become tech-centric. That’s forced many firms to sweeten their offers. Nearly one quarter (23 percent) of respondents attributed their pay increase to a change in employers, according to the survey.

Government IT jobs, on average, pay better than is commonly thought, averaging within a few hundred dollars a year of what health care providers, transportation and logistics firms, retailers, and Internet services pay.

But in a ranking of industries, government finished 16th on the list this past year at $91,752, trailing the financial services, aerospace and defense, and entertainment industries. That was 6.8 percent higher than the prior year and up from $79,605 from a comparable study five years ago. 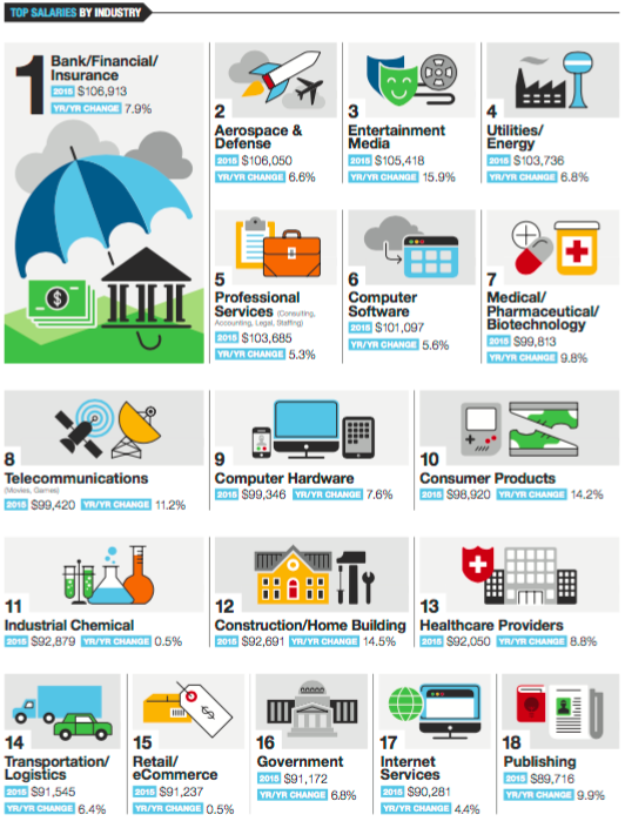 However, “Agencies are finding it hard to attract young tech workers – and even harder to get them to stay,” said David Wennergren, a former Defense Department CIO and now executive vice president at the Professional Services Council, a government contracting trade group.

“In the absence of significant civil service reform, most agencies are still hampered by the [government’s] grade structure and salaries. Some special hiring initiatives, like the Presidential Innovation Fellows program, provide the ability to offer new employees significantly higher starting salaries, but these special programs only account for a small percentage of hires across the government. Even as their careers progress, senior executive salaries do not begin to be competitive with private sector counterparts in the tech business,” he said.

Meanwhile, projected demands for new expertise continues to grow in the face of an aging federal IT workforce and daily cyberattacks.

U.S. CIO Tony Scott, said as recently as last November, at a FedScoop conference in Washington, D.C., that the government is attempting to fill more than 10,000 estimated openings for cyber professionals in the federal government in the coming years.

The competition for talent, however, appears to be growing fiercer.

Some of the biggest salary increases in the survey showed up in the paychecks of new technology workers (with one to two years’ experience), according to Dice, suggesting mounting wage pressure for entry-level technology jobs.

Bonuses meanwhile are becoming more common, and are on the rise. The study found that 37 percent of tech executives and specialists received a bonus this past year, averaging $10,194 — about 7 percent more than last year’s average.

“The competition for tech talent today is undeniable. Demand for skilled talent and low unemployment rates for tech professionals aren’t making the hiring landscape any easier. Employers realize offering competitive pay is a necessity,” Bob Melk, president of Dice, said in a statement. “What’s promising is the tech industry recognizes the need to fill open seats as well as to reward tech talent for their hard work.”

That competition is even more intense when the numbers are broken out by region and the skills in demand.

The Dice report also revealed that those with expertise in cloud and data analytics software are commanding top dollars.  Specialists in HANA (high performance analytic applicance), Cassandra, Cloudera, OpenStack and similar high-demand skills are averaging paychecks topping $140,000 a year, according to Dice’s figures.

If there’s an upshot for government agencies, it’s the opportunity many agencies can offer to tackle big IT challenges with few parallels in the private sector.

“Granted, compensation can’t be the compelling reason to choose a career of public services,” said Wennergren.

“Nonetheless, to attract and retain the best and the brightest in both the civil service ranks and for government contractors – in fields like cybersecurity, digital services – a look at ensuring more equitable compensation would help,” he said. 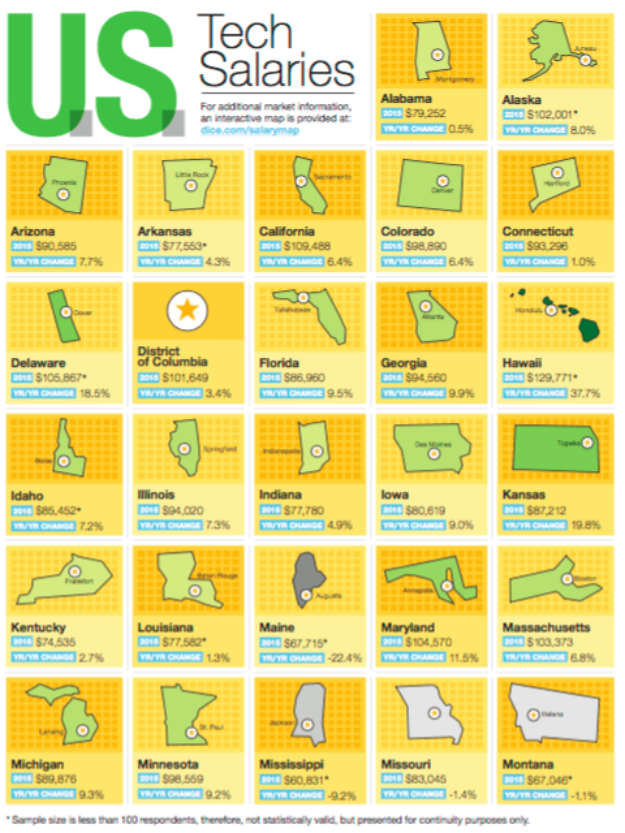 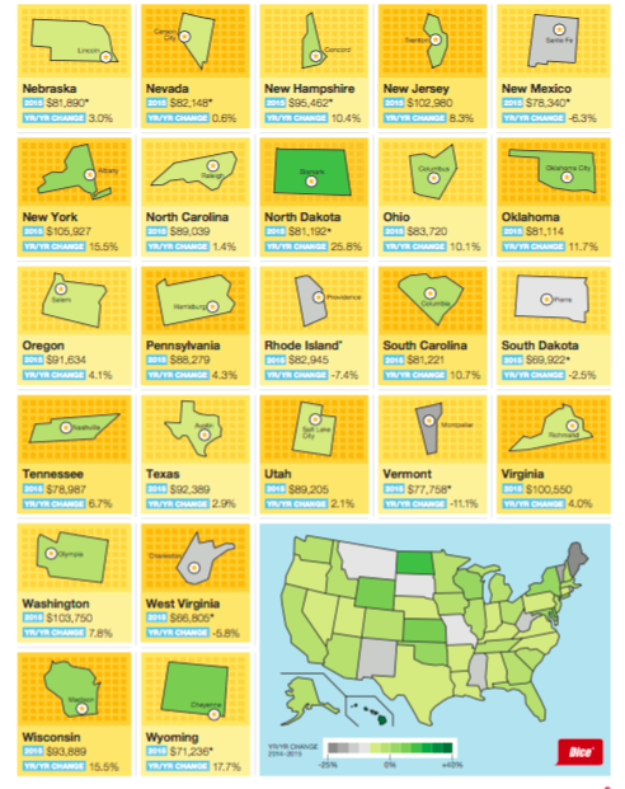 by Dave Nyczepir • 8 hours ago
Defense

DOD grapples with the...

by Billy Mitchell • 9 hours ago
Tech