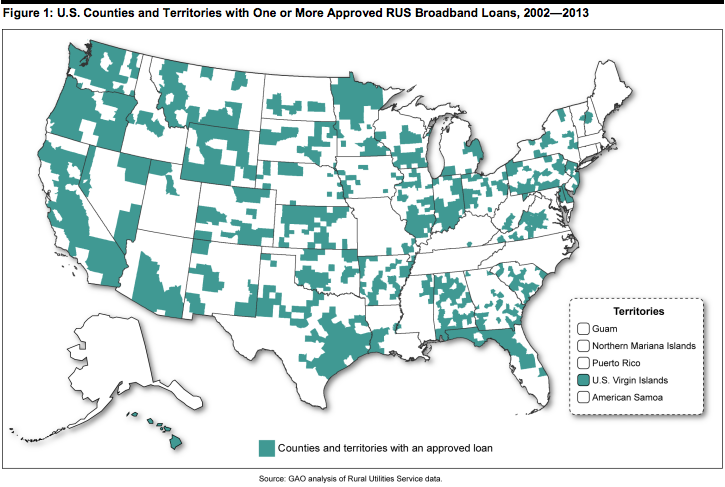 An Obama administration stimulus effort to bring high-speed Internet connectivity to rural areas is underachieving, and even elements of the program implemented properly can’t be deemed successful because there’s little evidence of improved connectivity in targeted regions, a Government Accountability Office investigation has found.

Since 2003, the Agriculture Department’s Rural Utility Service has financed 100 loans, totaling $2 billion, to rural areas facing economic decline due to lacking digital connectivity through the Rural Broadband Access Loan and Loan Guarantee Program — recently extended by the 2014 Farm Bill. The GAO found that 48 of those loans are in the process of being repaid and nine have been paid back in full, a somewhat positive sign.

However, the rest of the loans have been canceled — 25 rescinded and 18 defaulted upon — which GAO said represents an inefficient use of RUS resources. And on top of that, the report found a lack of investigation “to better understand what might lead a project to default or otherwise make a project a poor candidate for receiving a loan,” despite federal guidance to do such.

In 2005, USDA’s inspector general reviewed the loan program, at which time 6 of 28 loans had gone into default, and found that “had the progress of these projects been timely and thoroughly monitored, RUS might have been able to avoid advancing loan funds to companies that were failing. Because these loans were not carefully serviced, these funds are not available to support future broadband loans.”

When GAO began investigating the loan program eight years later, it found there was still no oversight or analysis to better determine a strategy for improving the success of the loans, though USDA rejected 149 loan applicants of the 249 total since 2003. USDA attributed this to a lack of staffing.

But even those programs being repaid or that have already been paid back in full are disconnected from any tangible measures of success, GAO said. And while loans have helped some providers overcome financial barriers to broadband deployment and led to higher employment levels in some counties, GAO concluded USDA’s goals in the program did not align with its departmentwide goals. Additionally, the department’s Annual Performance Report does not list any “goals or measures to determine the loan program’s progress towards economic development outcomes,” the report said.

“As our past work has shown, agency performance goals that do not link to program goals can lead to incentives and behaviors that do not support the achievement of division or agency-wide goals,” the report states. “Performance goals that better evaluate progress toward the loan program’s goals may help USDA and Congress better monitor the outcomes of the loan program.”

The GAO itself found fairly mixed results on what broadband implemented from loan funds meant. In general, rural areas implementing broadband from the RUS loans had no more broadband providers than those areas rejected by the program or for areas that had loans rescinded. However, GAO said impacts could be seen on a localized level with some areas increasing broadband connectivity into inaccessible areas, rather than increasing the number of overall providers.

This could bring up a heated debate within Congress, as Republicans have long protested Obama’s efforts to fund such broadband improvements and claimed a lack of evidence of improvement. The GOP argued in the past that many of the funds were going to areas disguised as rural that were actually suburbs of big cities. This report could fuel Republican efforts to kill the program, which has continually received less funding in recent years.

Still, many areas affected by the funds applaud the program. Communities in rural Vermont, New York and South Dakota, among others, told GAO the RUS loans have drastically changed their broadband connectivity and improved business services and quality of life in those states.