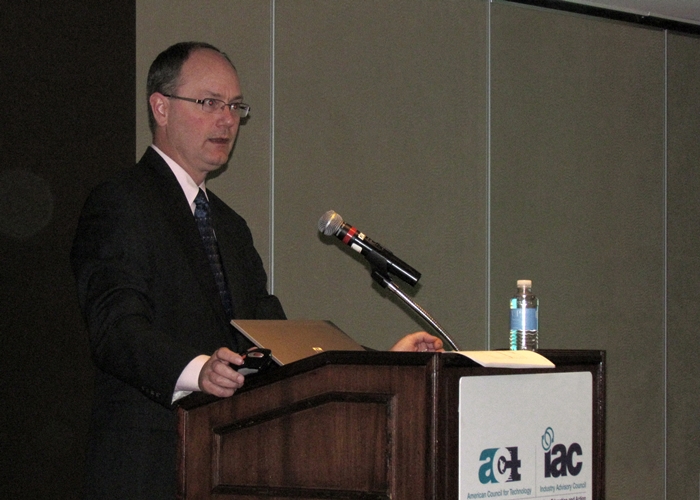 The Department of Veterans Affairs IT leadership is in what CIO Roger Baker calls a “budget lockdown session” today figuring out how to allocate the $2.7 billion it has to spend this year with the private sector.

“We’re going through a 1,300 line spreadsheet to figure out what we’re going to spend – and no, you can’t FOIA that document,” Baker joked this morning at an ACT-IAC Executive Session at the Metro Center Marriott.

So while those exact numbers aren’t available, Baker pointed out a number of priorities sure to get the big bucks this fiscal year, notably $800 million toward the VA’s publicized 16 major initiatives, $150 million toward Virtual Lifetime Electronic Records (that will be slightly helped by the Department of Defense and the VA’s quasi-agreement on a joint common electronic health record) and there is a new RFI out for a new e-mail system he figures can be hosted outside of VA.

Baker said he also plans to put about $100 million for the Veterans Benefit Management System each year for the next several years. He said he would like the system to run more like a private healthcare system in turns of customer service, raising customer satisfaction rates to 98 percent from the 80 percent they stand at today by creating a paperless environment to help streamline the business processes.

And don’t think no one is paying attention. Baker says that one of the hot stories in VA these days are the cold calls Secretary Eric Shinseki is making to the department’s more than 1,800 800-numbers asking for information.

“He’ll pick a number at random and say, ‘Hi, I’m Erik and a veteran. What can your office do for me?’” Baker said. “Sometimes the people know every answer and are super helpful and others it’s a little less than ideal.”

When it comes to cost savings, Baker said his office has been incredibly successful when it comes to project development by not letting anything proceed more than six months without meeting a deliverable. He says that by pushing staff to meet deadlines and deliver before a project gets out of hand has saved the agency a record $200 million that by Baker’s calculations in more in the neighborhood of $400 million.

“At first there were excuses of ‘I have nine months of paperwork, so how can I get this done in six months?’ and our response was to fix those types of obstacles to keep our development programs on task to avoid cost overruns,” Baker said.