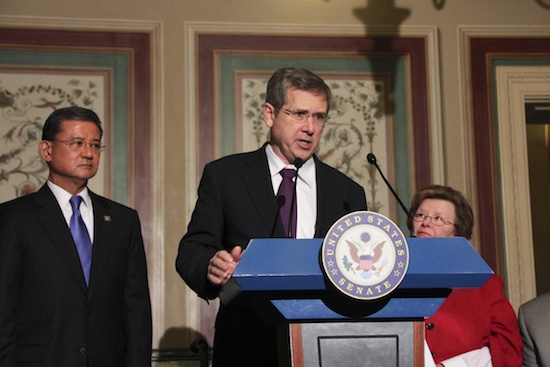 The Veterans Affairs Department’s disability claims backlog became the center of congressional attention at a May 22 roundtable discussion of the Senate Appropriations Committee.

Currently, claims processed at regional VA offices average 292 days. In Chicago — the fourth worst VA regional office in terms of processing time — claims average 465 days. The delays are not solely reflective of VA inefficiencies; information sharing is required between multiple agencies and VA before disability claims can be adjudicated.

At the roundtable, Mikulski commended the Internal Revenue Service and Social Security Administration for upping their game, so to speak, and getting necessary information to VA quicker to speed up the adjudication process. Six months ago, the IRS moved from reporting biannually to VA to reporting weekly, improving the quality of information reported simultaneously.

Lawmakers agreed it is incumbent upon each agency to identify a high-level employee within the agency to focus solely on disability claims backlogs, reporting to the committee every two months on progress made. Mikulski called on Hagel in particular to ensure VA got from DOD all necessary information and “for there to be electronic systems developed, so there are no techno-boondoggles.”

“By fully integrating an electronic medical record coming from Department of Defense to Veterans Affairs, we can do better for our veterans,” Kirk suggested.

Hagel, in response, said: “[W]e’ve got a ways to go. We get that. But we’re moving in the right direction. It will be done. And I want to assure you, as I have Secretary Shinseki and members of Congress, that DOD will be a full partner, a responsible partner, understanding our piece of this, and we intend to be successful.”

In a separate announcement yesterday, Hagel stated DOD planned to pursue a commercial solution for electronic health records instead of adopting the VA’s Veterans Health Information Systems and Technology Architecture.

“Our service members and veterans, and their families, expect and deserve a seamless system to administer the benefits they have earned,” he said. “Secretary Shinseki and I will continue to work closely together to deliver on that promise.”

The issue of disability claims backlog was raised six years ago through the Dole-Shalala Commission that came out of the Walter Reed scandal. At the time, the commission called for a seamless transition for veterans particularly between DOD and VA. Despite this call to action, the problem remains.

On April 29, 68 senators wrote a letter to President Barack Obama urging him to take direct action to ameliorate the VA disability claims backlog. Since then, lawmakers have pushed DOD and VA in particular to address the issue in its entirety by 2015.

“With the president’s leadership and the support of the Congress, we are aggressively executing a plan that we have put together to fix this decades-old problem and eliminate the backlog as we have indicated in 2015, and by that, I mean no claim being processed longer than 125 days, and our quality of performance at 98 percent or better,” Shinseki promised.