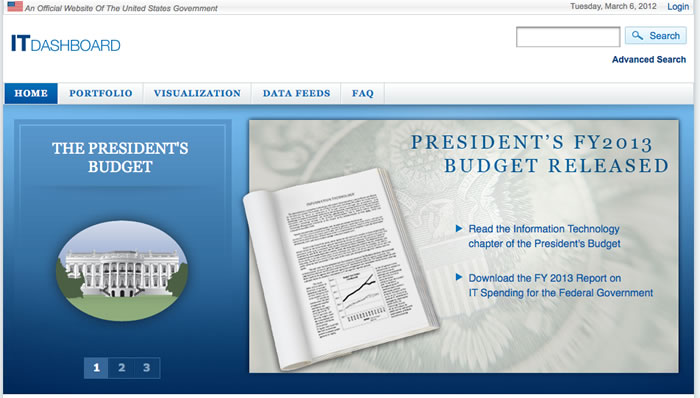 The White House announced an updated federal government IT Dashboard on Tuesday, including publicly detailed IT investment information in support of President Obama’s proposed 2013 fiscal year budget. The platform first launched in June 2009.

“Already, these enhancements are improving the way taxpayer dollars are spent,” VanRoekel said. “Leveraging the IT Dashboard and Techstat accountability sessions to hone in on the most critical projects, agencies and OMB have driven reforms that have saved taxpayers upwards of $4 billion since the initial launch. Through reporting of new operational metrics, the updated IT Dashboard provides unprecedented insight into the performance of each major IT investment in the Federal government in order to ensure that each IT dollar is being spent most effectively.”

The changes, according to VanRoekel:

Making the Dashboard more accessible: The Dashboard now provides access to individual projects and activities associated with an investment, links investments to funding sources, and includes enhanced visualizations to better track investment performance year-to-year. For example, for VA’s Medical 21st Century MyHealtheVet investment, you can now see details for each of the six supporting projects and how each is performing, leading to faster pinpointing of performance problems.

Identifying duplication: New data on what kind of services each investment provides helps agencies identify and address duplication in their IT portfolios. When combined with other Dashboard data, users can slice-and-dice the IT portfolio by agency, bureau, type of business supported, type of service provided, and budget account.

Improving data quality: Improved validations and warnings prevent erroneous data from coming into the system, and new data quality reports help agencies to identify improvements they can make to their existing data.

More data and more tools: More datasets are now available, and additional tools are in place that enable the public to participate by downloading and building their own applications. For example, each investment’s performance history and trend is now available as a data feed, allowing developers to embed charts of any investment’s history directly into news articles, blogs, or interactive visualizations.