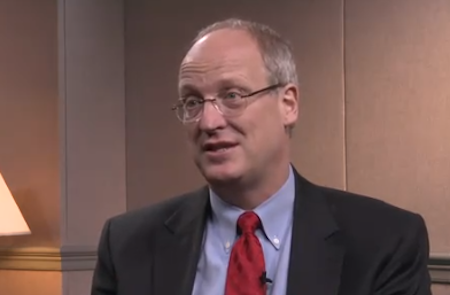 After a 32-year career in the federal government, DOD’s David Wennergren will walk out of the Pentagon for the last time, but will continue seeking change.

Days before his retirement after 32 years at the Navy and the Defense Department, David Wennergren was understandably upbeat.

“Good talking to you this morning!” he said brightly, when I got on the phone with him. “How’s life?”

But Wennergren’s chipper, voluble demeanor was not just the giddiness of his impending retirement; it seems to be his default. In fact, thinking about his last day on the job — Friday — might have been the only thing bringing him down slightly.

“It’s a bittersweet moment,” he said. “It’s been an amazing ride. I’ve been able to be a part of, and witness, a lot of great adventures.”

Over his three-plus decades of work — most notably as the Navy’s chief information officer, DOD’s deputy CIO, vice chair of the federal CIO Council, and, finally, DOD’s assistant deputy chief management officer — Wennergren earned the reputation as a talker, yes, but also as a leader who values collaboration, forward thinking and personal interactions.

Get him going on any of these topics, and he’ll just take off. A voluminous reader — especially on management theory — Wennergren knew he couldn’t contain himself when I asked which books stuck with him the most during his career.

“Hm,” he said and chuckled (as he did before most answers). “There’s no way to answer that question shortly. So I’ll just ramble for a couple minutes.”

In no particular order, he tore through six books over roughly four minutes:

Five or six days a year at his last two jobs, Wennergren would gather his leadership team and discuss a management book they had all read. The author would come in to lead the discussion. “Expanding Horizons,” Wennergren called it.

“It really seemed to pay dividends,” he said. “It helped the team come up with a common vocabulary and have a safe place to think about new ideas and have minimal risk associated with them.”

Wennergren spent his career pushing himself, and those around him, to think about what he refers to as “the art of the possible.”

“I honestly believe the tyranny of the inbox and the deadlines of today drive people to spend too much time in the moment and not enough time thinking about what the art of the possible might be for the future,” he said.

DOD’s common access card — a department fixture that enables both physical access to DOD buildings and digital access to DOD networks — is a good example of the “art of possible,” he said. It’s a “classic change story.”

“People were clamoring for information security solutions, but they didn’t know they were really searching for a smart card,” he said. “They were just looking for network security improvement.”

And DOD did just focus on network security for a while — digital signatures, public-key infrastructure, for example. Wennergren and his team soon realized it could solve two security issues — physical and digital — with one solution: the common access card.

“By having a stretch goal and reaching beyond what the immediate need was to find something better was really powerful,” he said. “To create a single solution we could roll out for 3.5 million people that’s turned into, I’ll say, the largest and most successful smart-card implementation in the world.

That was a decade ago. The smart card is just as relevant today. It’s spread to the rest of the federal government.

“It has spawned something because people were able to think about the future and drive change,” he said.

But for a man who thinks ahead as part of his day job, Wennergren has spent a career bouncing around. He rapidly ticks off his multifarious career stops: logistics, insulation management, financial management, base closures, base reorganizations, information management.

“There are those people who have a whole career plan. Then there are people who manage their career by opportunity and serendipity,” he said. “I fear I fall more into that second camp.”

I asked Wennergren if there was any way to succinctly sum up his career. As usual, he laughed.

“You risk sounding egomaniacal when you answer questions like that,” he said. “I would pick opportunities to lead change. … The common thread that unites my career is finding opportunities to face change and effectively get it implemented.”

Leaders today, Wennergren believes, will have to seek opportunity wherever they can. Siloed expertise won’t cut it anymore.

And Wennergren himself will keep seeking change — “stay fresh,” he called it — after he walks out of the Pentagon for the last time Friday. Of course, he’ll be reading (He needs to finish “Thinking, Fast and Slow,” by Daniel Kahneman, he admits). But Wennergren also promised “more adventures ahead,” without getting into specifics. “One step at a time,” he said.

“I have, as they say, miles to go before I sleep.”