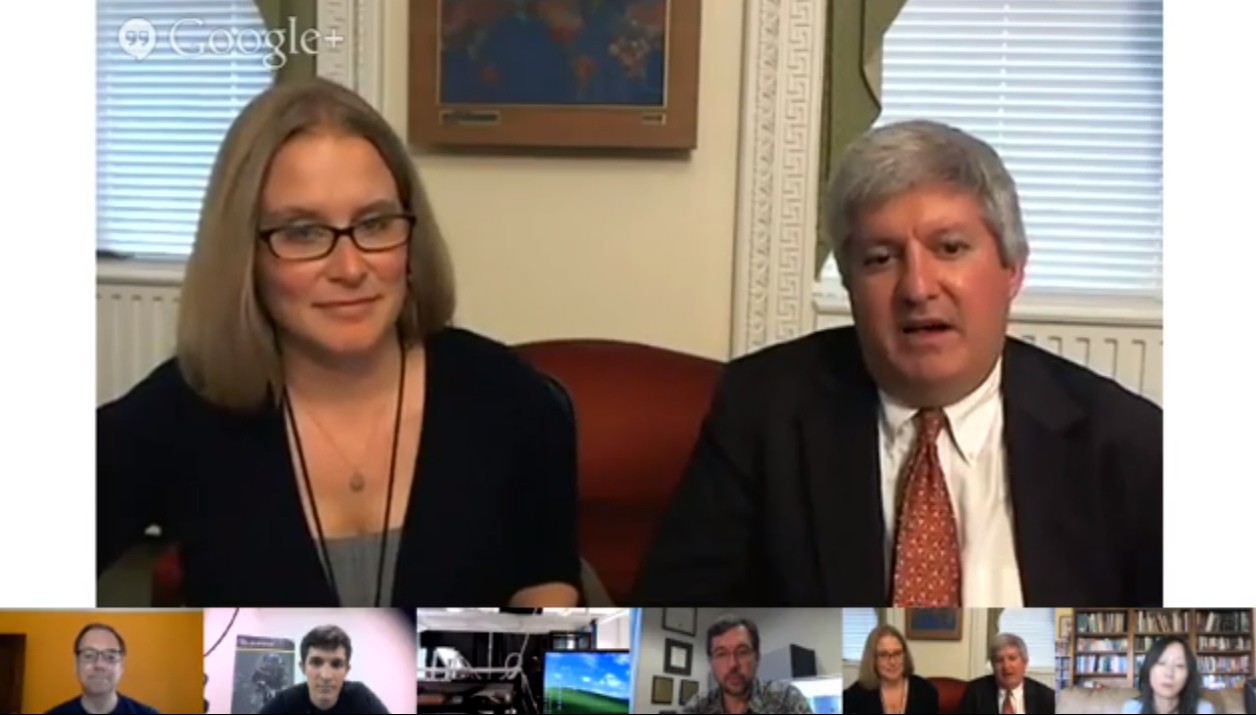 Tom Kalil and Meredith Drosback hear from a panel of scientists and engineers at the July 19 “We the Geeks” Google  Hangout.

Think superpowers are found only in comic books and action movies?

Tom Kalil, deputy director for technology and innovation at the White House Office of Science and Technology Policy, and Meredith Drosback, a TMS fellow working on the Materials Genome Initiative at OSTP, hosted a “We the Geeks” Google Hangout Friday.

The “We the Geeks” Hangout is a series organized by the White House to highlight the future of technology, science and innovation in the U.S. Friday’s “We the Geeks: The Stuff Superheroes Are Made Of” Hangout heard from some of the brightest minds in science: a panel of five scientists and engineers working to bring to life superhero powers.

Nathan Landy, a graduate student at Duke University, is working on an “invisibility cloak,” which despite sharing a name with Harry Potter’s fantastical device, could have practical implications — stagehands, for example.

Nate Ball is the co-founder of Atlas Devices and inventor of the Ascender, which he enthusiastically demonstrated throughout the Hangout. The Ascender brings to life props seen in movies such as “Mission Impossible: Ghost Protocol” or Batman’s batclaw, a device used to rapidly reach the top of a building or other vertical surfaces.

The panel took questions from submissions on Twitter, using the hashtag #WetheGeeks. Panelists gave demonstrations of their technology, and provided some personal insight into what real-life superpowers they wish they had.

“Our intelligence is our real superpower,” said James Kakalios, panelist and author of “The Physics of Superheroes,” at the end of the Hangout. “We use it every day, and we’re working to improve it every day because the forces of evil are always out there.”
Ladies and gents — let your geek flag fly.

by Dave Nyczepir • 8 hours ago
Tech

by Billy Mitchell • 12 hours ago
Modernization