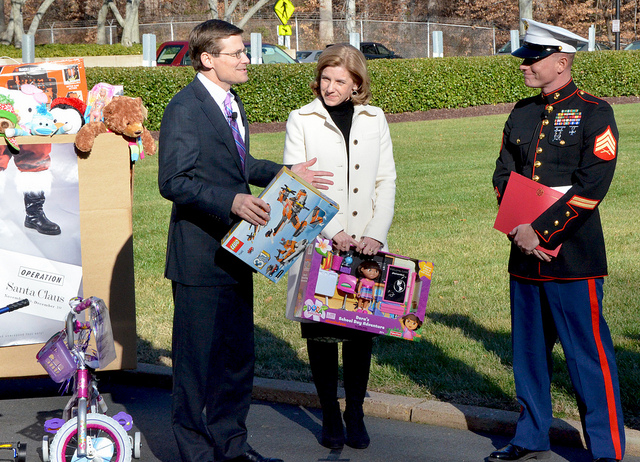 Former CIA Deputy Director Michael Morell (left) is one of five named to a panel that will review NSA’s surveillance programs.

The members of President Barack Obama’s outside group tasked with reviewing the National Security Agency’s surveillance programs are familiar to Washington, but have not necessarily been met with open arms in the Beltway.

The five-member panel, which the White House officially announced Monday, is a pastiche of the intelligence, academic and legal communities. But one uniting thread is the panel’s long-standing connection to the executive branch. To some, it’s a necessity — where else are you going to find experts on this topic with security clearance? To others, it’s yet another example of the administration’s unwillingness to submit to true outside scrutiny.

“The picks show that the president’s commitment to having ‘independent’ and ‘outside experts’ review the spying programs is false,” said Mark Jaycox, policy analyst at the Electronic Frontier Foundation, which has filed Freedom of Information Act requests to obtain information about the NSA programs. “All the picks are thorough Washington insiders.”

While expressing similar reservations, Orin Kerr — a law professor at The George Washington University and an expert on cyber-crime and Internet surveillance — saw reason for hope.

“The group might be effective in the end, as they each bring a different skill set and perspective to the problem,” he wrote in a blog post on the popular conservative-leaning law blog, The Volokh Conspiracy. “I imagine that Swire will be the civil libertarian, Sunstein the pragmatist interested in the facts and Clarke the government’s guy.”

Others worried about the panel’s absence of a technology expert. Joseph Lorenzo Hall, senior staff technologist at the Center for Democracy and Technology, said he would have liked to see Princeton computer science professor Ed Felten included. Felten submitted a legal brief supporting the American Civil Liberties Union when it filed a lawsuit arguing NSA’s collection of telephone metadata was unconstitutional.

But arguments over the panel’s composition are almost frivolous, Jaycox said. The group isn’t even authorized to investigate the most disturbing part of the programs — privacy abuses.

“The most important thing about this investigation is its inability to fully provide the American public with the information they need,” he said.

Indeed, in his memo establishing the group, Obama wrote: “The review group will assess whether, in light of advancements in communications technologies, the United States employs its technical collection capabilities in a manner that optimally protects our national security and advances our foreign policy …” Here, many were expecting “and protects civil liberties” to follow.

Instead, Obama simply continued, “… while appropriately accounting for other policy considerations, such as the risk of unauthorized disclosure and our need to maintain the public trust.”

Which is why Jaycox and others have called for a full congressional investigation on privacy abuses to complement the current panel’s work.

Still, this panel will have weight at the White House; Obama met with the group Tuesday. So what can the country expect from each of the panel’s members? What might they contribute to the group’s final report, due to the president by Dec. 15?

Morell spent 33 years with CIA, quickly rising to chief of the agency’s Asia, Pacific and Latin America Division. During the George W. Bush presidency, Morell directed Bush’s daily briefings team, which made him Bush’s top briefer during the Sept. 11, 2001, terrorist attacks. Under Obama, Morell was part of the national security team that oversaw the raid that led to Osama bin Laden’s death while serving as CIA’s director for intelligence.

In 2010, he became the agency’s deputy director, later serving two stints as acting director. On Aug. 9, he retired from CIA: “While I have given everything I have to the Central Intelligence Agency and its vital mission for a third of a century, it is now time for me to give everything I have to my family,” he said in a statement.

He has not spoken extensively about his views on the surveillance programs.

But more relevant to the panel’s investigation are Clarke’s 2012 book — “Cyber War: The Next Threat to National Security and What to Do About It” — and a pair of recent op-ed pieces he wrote.

In April 2012, Clarke called for the Department of Homeland Security to “inspect what enters and exits the United States in cyberspace” using its Customs authority, he wrote for The New York Times. “Customs already looks online for child pornography crossing our virtual borders. And under the Intelligence Act, the president could issue a finding that would authorize agencies to scan Internet traffic outside the United States and seize sensitive files stolen from within our borders.”

Weeks later, on the one-year anniversary of the bin Laden raid, Clarke praised the Obama administration’s handling of not just the raid, but most of the administration’s national security decisions.

“These choices and those at lower levels have created a steady, competent national security team that has handled a myriad of crises with aplomb,” he wrote for the Tampa Bay Times. “As we pass one year since the successful raid against bin Laden and think about who will be commander in chief for the next four years, we should remember not only the achievement of May 1, 2011, but the many other national security achievements of the past three years, as well.”

During Obama’s first term, Sunstein oversaw all federal regulation as the president’s administrator of the Office of Information and Regulatory Affairs, where he focused more on domestic regulations — financial, health care, environmental, nutrition — than intelligence regulation.

“Those who subscribe to conspiracy theories may create serious risks, including risks of violence, and the existence of such theories raises significant challenges for policy and law,” the paper’s abstract reads. “Because those who hold conspiracy theories typically suffer from a crippled epistemology, in accordance with which it is rational to hold such theories, the best response consists in cognitive infiltration of extremist groups. Various policy dilemmas, such as the question whether it is better for government to rebut conspiracy theories or to ignore them, are explored in this light.”

The paper investigated government campaigns to infiltrate these online groups by monitoring social networks and Internet communications. Some, Jaycox included, have worried this hints at Sunstein’s pro-surveillance position.

Swire, the one appointee who seemed to please privacy advocates, was an economic adviser for Obama’s transition team. He also picked up an expertise on Internet surveillance while working with the Clinton administration to update wiretapping laws for the Internet age.

“In one good act, the White House selected Peter Swire to be on the task force,” Jaycox said.

“He will bring both the know-how and principles to ensure that Americans’ personal information is protected in both the public and private sphere,” said Carmel Martin, executive vice president for policy at the Center for American Progress, where Swire is a senior fellow.

Between the Clinton and Obama years, Swire published academic papers on the Foreign Intelligence Surveillance Act, criticizing the 1978 act that created the FISA court.

“The procedures reflect a constitutional compromise between claims of executive discretion and civil libertarian arguments for prior judicial involvement,” he wrote in one paper published in 2004. In the paper, Swire called for reforms to the court, limits to its authority and increased oversight of its decisions.

Most recently, Swire has been a strong advocate of allowing Internet users to opt out of online tracking programs and has published a regular column for Privacy Perspectives.

Stone and Obama go way back. Stone hired Obama to teach constitutional law at the University of Chicago Law School, where Stone was then the dean. Later, Stone advised Obama’s 2008 presidential campaign.

But Stone became critical of Obama’s clandestine administration, calling him “Our Untransparent President” in a 2011 New York Times op-ed, and accusing him of “zealously applying the state secrets doctrine.”

“The record of the Obama administration on this fundamental issue of American democracy has surely fallen short of expectations,” he wrote. “This is a lesson in ‘trust us.’ Those in power are always certain that they themselves will act reasonably, and they resist limits on their own discretion. The problem is, ‘trust us’ is no way to run a self-governing society.”

Since the NSA surveillance revelations, prompted by Edward Snowden’s information leaks, Stone has said he sees “nothing illegal or criminal about these programs,” he said in an interview on Democracy Now! “They may be terrible public policy — I’m not sure I approve of it at all — the fact is the claim that they’re unconstitutional and illegal is wildly premature.”

Stone also disagrees with the original legal decisions and Supreme Court decisions that have allowed these programs to exist.

“I do believe that it’s problematic, and I think, in fact, there should be statutes that prohibit the gathering of this type of data by private entities, as well as by the government, in the absence of at least a compelling justification.”

But when the report is handed to the president in several months, it’s anyone’s guess exactly what each one of the five-member panel will say.