President Barack Obama Wednesday reaffirmed the U.S. commitment to the Open Government Partnership and announced several new open government initiatives in various agencies and departments during an event held at the United Nations.

“We’re going to work more closely with the health care sector and state and local law enforcement not just to improve public health and safety but to better protect the privacy and personal information of the American people,” Obama said, announcing the expansion effort.

Obama also announced enhanced transparency through upgrades to the USAspending.gov website, as well as expanded collaboration with the private sector and increased access to online education course in the U.S. for people around the world. 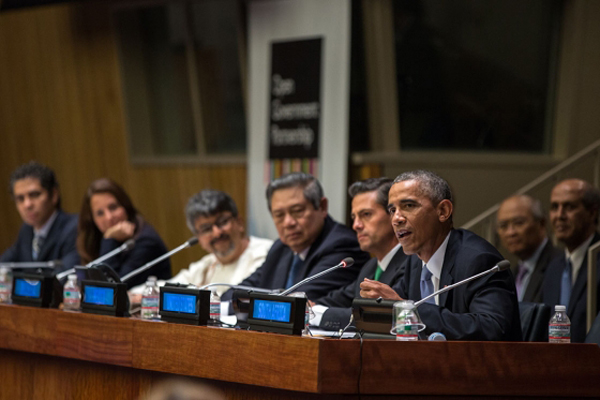 The announcement comes amid a growing backlash for what many have characterized as an unprecedented effort to crack down on government whistle-blowers, threats to jail journalists who refuse to divulge confidential sources and new reports that the White House has demanded changes to independent press pool reports.

The new open government initiatives will call on the newly-established U.S. Digital Service to remove barriers of existing digital government platforms by remaking the citizens’ government experiences. To do this, the administration will continue to recruit top digital talent from both the private and public sectors to serve as “digital professionals” in the Digital Service, the General Services Administration’s 18F initiative and other federal agencies, according to a fact sheet released by the White House.

Through the Digital Service team and the Digital Services Playbook, the administration plans to build new digital services in the open using transparent processes “intended to better understand user needs.” And by the end of 2015, the administration intends to adopt an open source software policy to fuel innovation, lower costs and benefit the public.

Another initiative, open education, will focus on increasing awareness and engagement and the open sharing of digital learning materials, tools and practices to ensure free access of learning resources. To do this, the State Department will partner with the White House Office of Science and Technology Policy and the Education Department to hold a workshop that will focus on open education internationally.

The Labor Department will launch an online skills academy alongside the Education Department that will award $25 million in grants. Once launched, the online academy will offer open online courses of study to create “high quality, free, or low-cost pathways to degrees, certificates, and other employer-recognized credentials,” according to the White House.

Internationally, the State Department will conduct three new pilots to use these open educational resources to support learning. The results of the pilots, which will be conducted by the end of 2015, will be made publicly available.

“We’re going to do more to help people in other countries, especially students, access the incredible online educational tools and resources that we have here in the States,” Obama said.

In another move to increase transparency, the White House also announced improvements to USAspending.gov, including a website redesign. The Office of Management and Budget will also improve accessibility to federal financial data under the DATA Act.

Obama touted the work of the United States to use open data for innovation.

“More entrepreneurs are using open data to innovate and start new business,” Obama said. “More sunlight is shining on how tax dollars are spent, and more governments are partnering with civil society to find new ways to expose corruption and improve good governance.”

While working toward transparency, the administration also will share best practices for data privacy with state and local law enforcement, in addition to privacy protection for big data analysis in health, led by the Department of Health and Human Services.

Since the partnership’s inception, spearheaded by the State Department in 2011, OGP has grown from eight nations to 64. At the end of his remarks, Obama said he wasn’t sure that an international partnership focused on transparency would work, but now, three years later, the project is successful, even though more work needs to be done.

“It’s not flashy, it doesn’t generate a lot of headlines, but the work you’re doing here is a steady wave of better government and a steady wave of stronger civil societies,” Obama said. “That’s the kind of world I want to leave my children.”