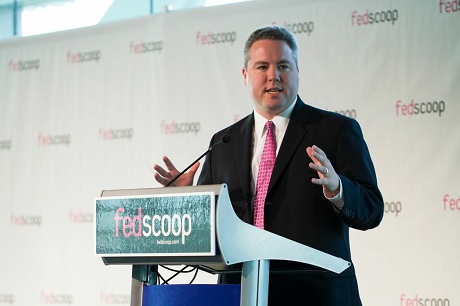 Joe Jordan is leaving government to take a role in the private sector. (File photo: FedScoop)

White House procurement policy chief Joe Jordan will be moving to FedBid to act as the president of public sector, according to a Dec. 20 company release.

Jordan, who was confirmed as administrator for the Office of Federal Procurement Policy in May 2012, will be growing and managing FedBid’s Federal Buyer base in his new position. He will also be responsible for assisting the company’s private-sector launch and the company’s state, local and education sections.

“With a diverse career over the last 20 years of significant public and private sector procurement, contracting, business process and solution-making successes, Jordan will be a natural fit to move FedBid’s public sector business forward,” FedBid CEO Ali Saadat said in a release.

Jordan was nominated as procurement policy chief in February 2012. He previously was a senior adviser to Jeffery Zients, then-acting director of the Office of Management and Budget. Zients has been in the headlines recently after the Department of Health and Human Services hired him to fix healthcare.gov in October.

“This new role leading public sector efforts with FedBid gives me the opportunity to continue building momentum in our efforts to help government buy smarter, while advancing economic growth in communities throughout the country,” Jordan said.

FedBid is an online marketplace that works to optimize the buying and selling of goods for businesses, government and educational institutions.