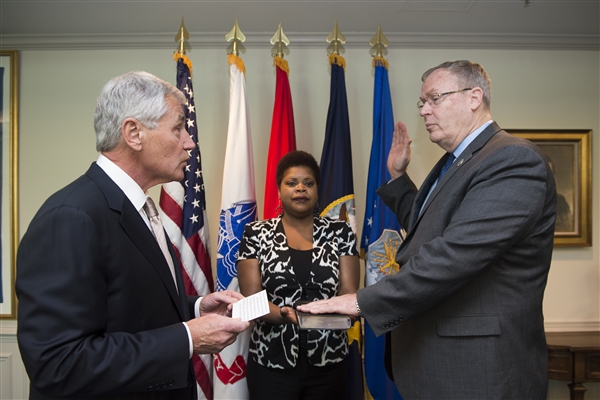 The Defense Department has a new deputy defense secretary.

During a ceremony yesterday morning at the Pentagon, Defense Secretary Chuck Hagel swore in Bob Work as his deputy.

Work, a former undersecretary of the Navy from 2009 to 2013 and career Marine artillery officer, will replace Christine Fox, who served as interim deputy defense secretary when Ash Carter stepped down last year.

President Barack Obama nominated Work for the role in February, and just last week the Senate confirmed his appointment.

“I am humbled by the confidence President Obama and Secretary Hagel have placed in me and pledge to do everything possible to help maintain America’s military edge,” Work said.

As deputy defense secretary, Work will be the second-highest ranking official in the agency. Under Hagel, his main role will be to manage the daily business and internal operations of DOD.

“Ash Carter and Christine Fox both distinguished themselves while serving as deputy secretary and have left a legacy of excellence,” he said. “I look forward to following in their footsteps and ensuring our service members, civilians and contractors have everything they need to protect our great nation and accomplish what we ask of them.”