Yahoo rejected just 2 percent of the government’s 12,444 requests for U.S. account data between January and July of this year, according to the Internet company’s new transparency report.

National security requests were included in the aggregate data, but not separated out.

But the high percentage of U.S. requests reflects similar trends in Facebook’s own transparency report, also recently released. Roughly 48 percent of Facebook’s data requests were from the U.S., while 42 percent of Yahoo’s requests came from the U.S. (a request can include multiple accounts). 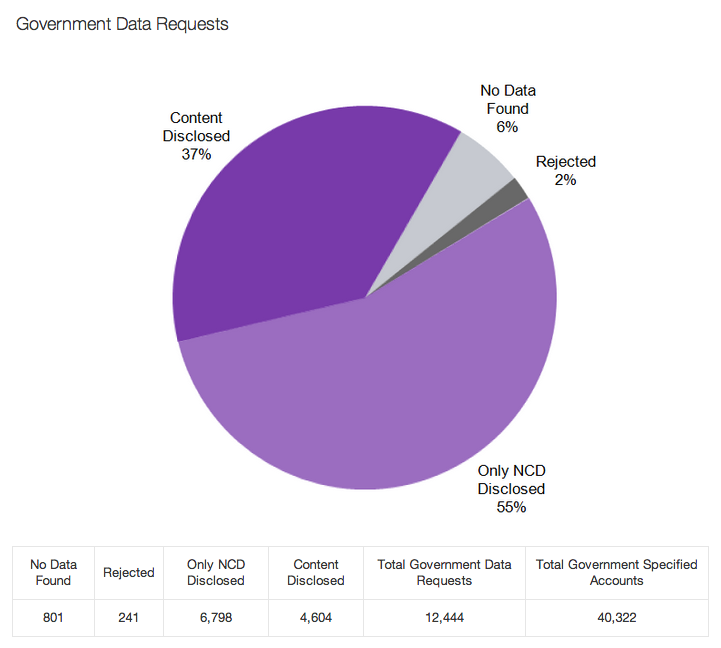 But just because Yahoo responded to a request did not mean it was providing actual user content to the government. For 55 percent of the requests within the U.S., Yahoo provided only noncontent data — such as name, location, IP address, alternate email address, login details and billing information. In 37 percent of cases, Yahoo did provide user content such as chats, emails, Flickr photos or a user’s address book and calendar.

While the 55-37 balance fluctuated from country to country, it generally favored noncontent data.

In instances where Yahoo did reject the request, the company said it was because “the government agency sought information outside its jurisdiction or the request only sought data that could not be lawfully obtained with the legal process provided.”

Yahoo made clear it wished to be more transparent with these type of general answers. The company is hoping it will be allowed to separate national security requests in future reports — or even express the number as a range (ie. from zero to 1,000).

“We strenuously disagree with the government’s position and will continue to advocate for greater transparency regarding requests made under national security authorities,” the report read. “If we succeed in persuading the U.S. government to allow greater transparency, we will disclose additional details in future reports, and we will also update this report with more details related to national security requests as permitted.”